Disney’s Animal Kingdom used to be only a daytime park. Not anymore. Rivers of Light has transformed Animal Kingdom into a park that is something special after dark. 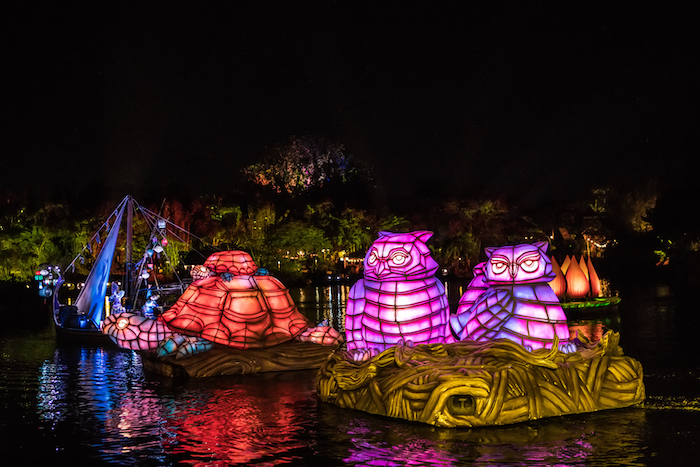 The animals in the floats represent different elements. The turtles represent water, while the owls represtnt sky. Photo by Brett Svenson

The show is visually stunning. It’s centered around celebrating the beauty of nature as seen through special effects, videos projected onto water, illuminated floats, and music.

Before the show stars, four large lotus flowers float into the center of the lagoon. Two trade-type vessels start the show with a narrator telling about how Earth is the only place where light and water unite to create the wonder of life. Here, spirits of animals can dance free in the “Rivers of Light.”

After the introduction, four illuminated floats enter, which are the spirit animals: elephant, tiger, turtle, and owl.

The music intensifies and there is a water dance featuring the animal floats and lotus flowers. The flowers literally dance with water to the music. Soon, video images of animals are projected onto screens of water and the music becomes more soothing. Balinese shadow puppets are used behind the sails of the trade ships to show the story of each of the animals.

The lotus water dance continues until near the end one of the lotus opens to a large centerpiece, which ignites in flames. A spectacular finale featuring all elements of the show leaves you feeling inspired.

The animals and flowers remain illuminated on the water for a few minutes after the show ends. This is a great time to get a few pictures.

Rivers of Light is available on select nights. Available show times may change with the seasons. 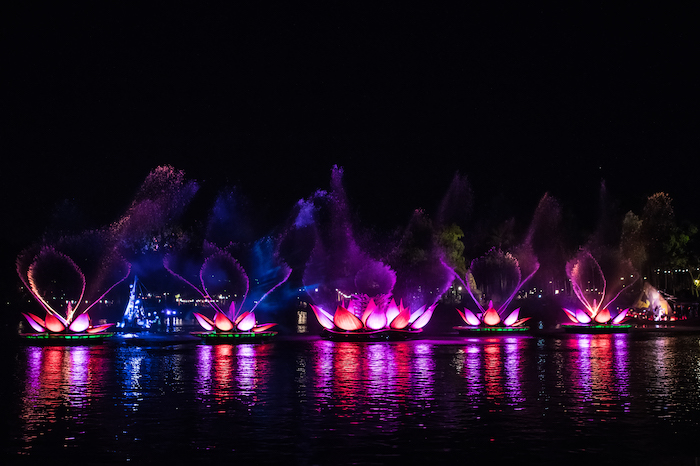 There are five lotus barges used in the Rivers of Light show. Photo by Brett Svenson

Even Crush thinks this sounds kewl, dude! So, where do you get in line? The standby line is located near DinoLand USA, but plan to get there plenty early.

The Discovery River Amphitheater is in Asia and seats around 5,000 people, making it one of the smaller venues at WDW for an evening show. 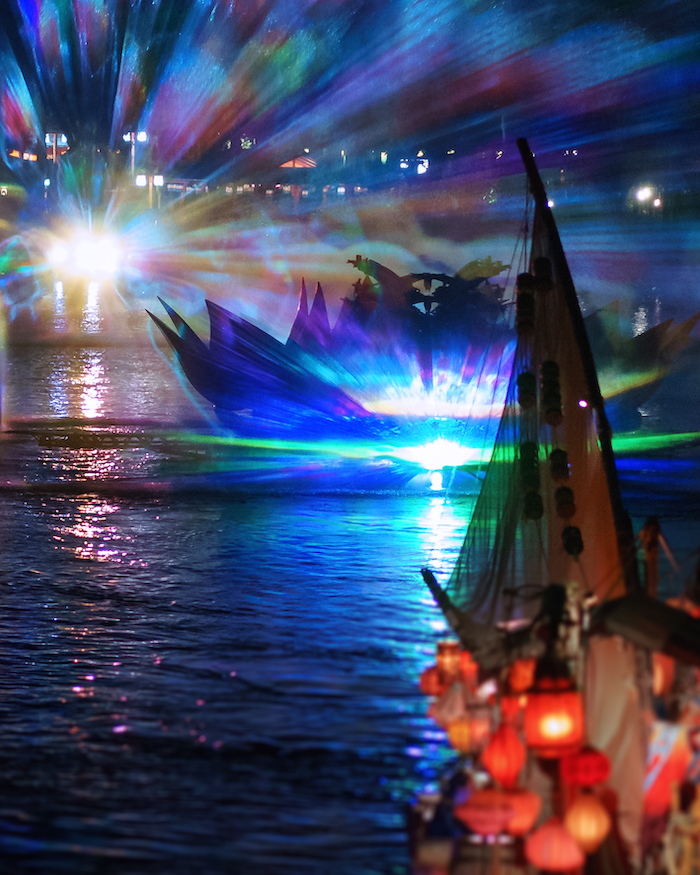 The lights from the show’s projections create beautiful reflections across the lake. Photo by Rich Ramos

Due to the small size of the amphitheater, Rivers of Light fills up quickly. Without a Fastpass, plan to get in line at least an hour before show time. 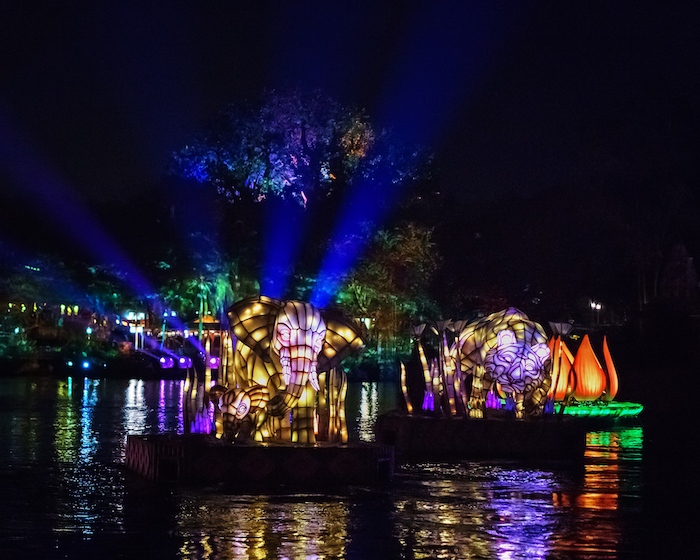 Fastpass+ is available and provides great seats, but with so many interesting experiences in Animal Kingdom, you might want to use other options. 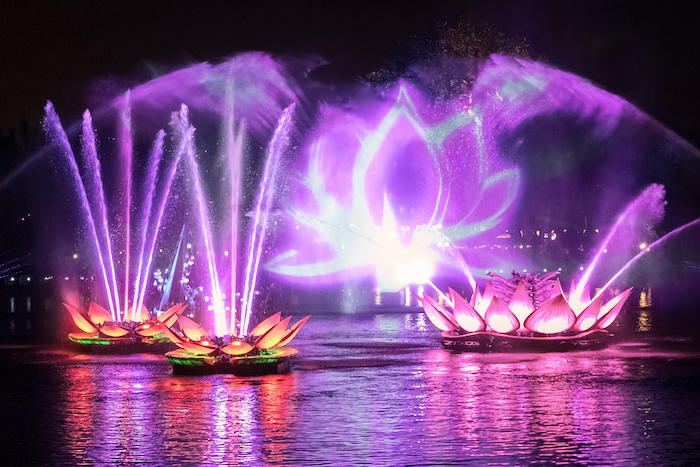 The lotus flowers come to life and use light, water, and fire in their dance. Photo by Rich Ramos

Those with a FastPass+ will access their prime seats near Expedition Everest in Asia. Guests with either type of reserved seating should get to the theater no later than 25 minutes before the show starts.

Don’t want to use one of your Fastpass+ choices on Rivers of Light? Dad doesn’t blame you! Reserved seating is available to those guests that reserve the Dinner Package. To reserve a Dinner Package, you choose between Tusker House Restaurant and Tiffins and also get a reserved seat for the show (It costs the same amount of credits as the restaurant normally would on the dining plan).

Another option to consider is the Rivers of Light Dessert Party. Do you like desserts? Do you like parties? Do you like great seats without waiting in line? This dessert party might be just what you need.

Do all of these options make your head explode? Don’t worry, the smart folks at Destinations to Travel can handle all the details for you! Check ‘em out! 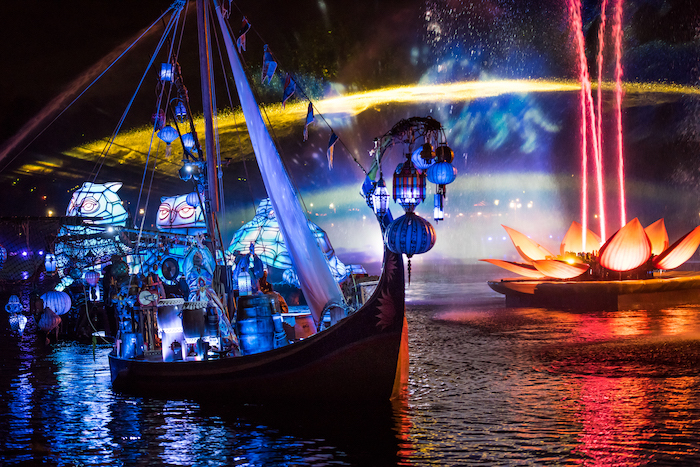 The barges and boats float around the lake throughout the show. Photo by Cliff Wang 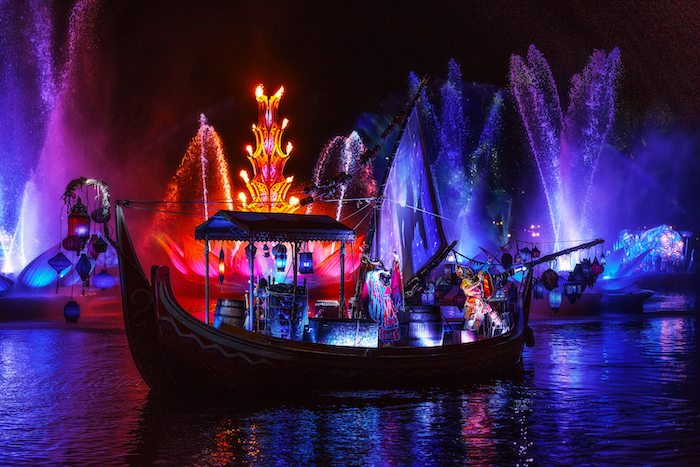 Toward the end of the show, the largest lotus opens and a tower of flames escapes the middle. Photo by Rich Ramos

Rivers of Light opened February 17th, 2017, after being delayed for almost a year.

Since Disney’s Animal Kingdom doesn’t have fireworks, it’s the only nighttime entertainment option on a grand scale. The drawback is, the theater is relatively small. So, unless you want to wait in line for at least an hour, you will need to book a Dining Package or FastPass+.

It’s not overwhelmingly a “wow” show. They could use a few more floats. But it’s not bad. You should definitely see it at least once.