Bright Suns! Hope all is well! I have a question in regards to getting to rope drop at Hollywood Studios for Smuggler’s Run in Galaxy’s Edge.

I want to be there between 5-6 am. My preference is using the Minnie vans, but they don’t start up until 6:30. The buses and monorails also do not start around 5 am. How do you recommend us use transportation to make it to HS that early? Would a Lyft driver drop us off in the front of HS? How does that work? 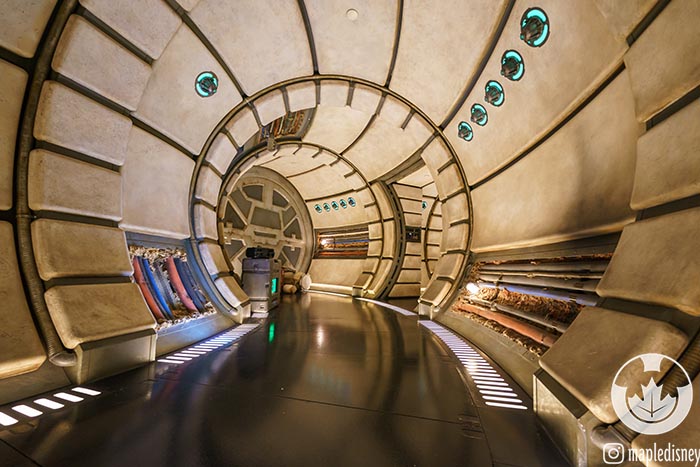 The detail is just AWESOME! – photo by Rich Ramos

It’s good that you are thinking about how to get to Disney’s Hollywood Studios early. Since the opening of Star Wars: Rise of the Resistance, Hollywood Studios has been a hopping place early in the mornings. It’s been open for almost 2 months now and people are still lining up to get into the park before 6 am.

Do YOU Need to be at Hollywood Studios that early?

My first thought when I read your question was, does Pella really need to be at Hollywood Studios in time for rope drop? You mention that you want to go to Millennium Falcon: Smuggler’s Run, but are you also looking to get a Boarding Pass for Rise of the Resistance? If so, then you definitely need to be there early, but if not, it’s not that essential that you rope drop and run to Smuggler’s Run.

Let me explain a little. Ever since Smuggler’s Run opened, people run to get in line right at rope drop. (It happens at Disneyland too.) The line is actually the longest 30 minutes after opening pretty much for the whole day. We experienced it at Disneyland and when we went Thanksgiving week. The first hour line was like 120 minutes and went down to 90 minutes by 11 am and stayed around there all day.

So if you aren’t trying to ride Rise of the Resistance (but you should), there’s not a need to arrive by 6. If you are the yes, by all means get there early.

How to get to Hollywood Studios by Rope Drop?

So how do you get to Hollywood Studios by 6 am with park opening at 7? Typically I would say grab Disney Transportation but not knowing what resort you’re staying at, I can’t totally recommend that. You should be able to bus over by 6, but you’ll have to start early and be careful that you don’t just miss a bus. The Skyliner and Minnie Vans don’t run that early so that’s out.

My best recommendation to get to rope drop at Hollywood Studios is Uber or Lyft. Set them up the night before. They drop off pretty much at the front entrance, as close or closer than the buses.

Pella, if you are trying to get a Boarding Group for Rise of the Resistance, then you do need to be at Hollywood Studios at least an hour before official opening time. I don’t recommend going to Smuggler’s Run first thing in the morning. It’s better to wait a while and let the morning crush disperse. Come back later in the day when the lines are shorter.

Uber of Lyft are probably your best bets for getting to Hollywood Studios for rope drop by 6. If you’re staying at a Value Resort, the buses should be fine, Moderates or Deluxe’s… not so much.