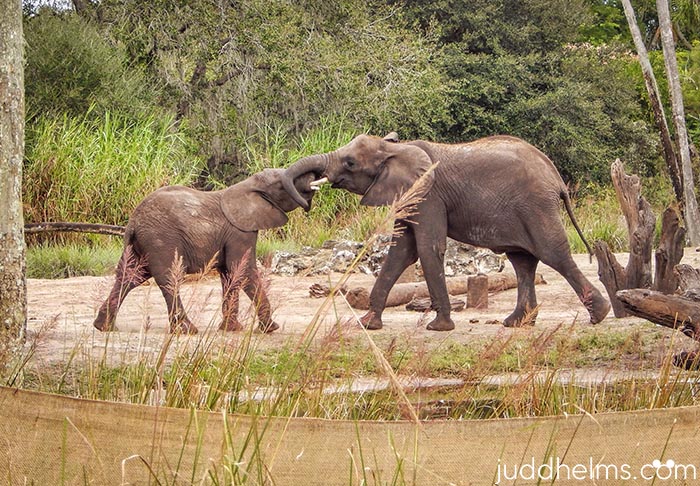 I love watching the elephants play – Photo by Judd Helms

After a year and a half, the crowds in Pandora: The Wold of AVATAR are still huge. But as with all the parks, Animal Kingdom starts the morning with no crowds and the crowds grow throughout the day and start to recede in the evenings.

So that means, when the park first opens is the lowest crowd level of the day. So it just makes sense to ride the busiest ride on your list first thing in the morning. If you take out Flight of Passage Kilimanjaro Safari and Na’vi River Journey, are the busiest rides in the park.

As for the opening procedure at Animal Kingdom, it varies depending on crowd levels. Yes, when crowd levels are big, the rope drop line is moved deeper into the park, past the Pandora area. That way, Disney can bring guests into Pandora early, maybe as early as 30 minutes before opening time.

When that happens, you can usually ride Na’vi River Journey and be done and back to the rope drop area before rope drop.

Whether you get into Pandora early or not, I would go directly to Pandora first thing, ride Na’vi River Journey then head over to Kilimanjaro Safari. Depending on the opening procedures that day you will end up on the Safari without much wait and if you’re lucky right at opening time.