Roy Disney was my hero. No story of Walt Disney World would be complete without a tribute to the forgotten Disney. Roy was Uncle Walt’s older brother and his Jimini Cricket.

While Walt Disney was undoubtedly one of the most creative people to live in our time, Roy O. Disney was the man behind the scenes that made the dreams come true. He had a gift for getting Walt’s nutty projects financed and getting Walt to finish them. My hero.

Roy Disney and Minnie how appropriate 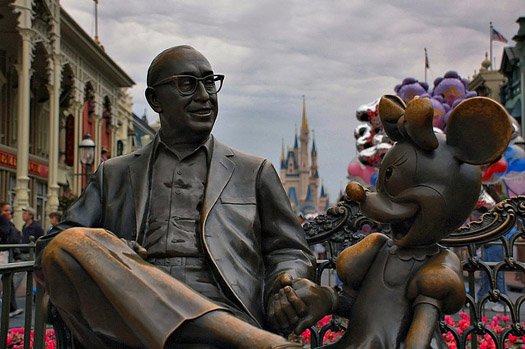 It’s appropriate that the statue of Roy sits on Main Street USA and it’s one of the first things you see as you enter the park. Like most of the things in Roy’s life, this statue usually gets overlooked. But that’s OK with Roy.

Walt was always the bellicose showman. He loved attention. He was brash and full of energy. From the time Walt was in high school he was a performer along with an artist. Roy was the quiet one. He was always in the shadows. Even now, if you Google Roy Disney, the first entry is not Roy O. Disney, brother of Walt, but Roy Edward Disney, Roy’s son. When you read about Roy, there is really nothing there that doesn’t refer to Walt.

The Real Story of Disney World

Walt Disney died in 1966 and the Disney company almost died with him. Walt’s dream of a "Disney World" was in disarray. There was no one left at Disney who could drive the project. Up until then every project had been driven by Walt and the company was leaderless.

Then came Roy to the rescue.

Here is the real story of Roy Disney and Disney World

Like a lot of comic book hero’s Roy Disney led a life in the shadows. The shadows of a brilliant genius.

Walt Disney was a man with lots of dreams, he just didn’t have any real money sense. After his first company went bankrupt (his last company without Roy) he moved to California and hooked up with his older brother. Roy was able to get some financing and the brothers pooled their resources and had a whole $750.00 to work on Walt’s newest project. And the rest as they say is history.

Roy O. Disney was the lesser known of the Disney brothers and that’s a shame. He made dreams come true for millions and especially for his younger brother.