“Hi, there. We are going to Walt Disney World the week after Thanksgiving in 2017. We have six adults and six children, nine to four, all tall enough to ride Flights of Passage. Pretty sure we won’t be able to get fast passes at the 30-day mark.

If we must wait in line for an hour to 90 minutes, won’t go if it’s more, and could take four adults and the kids out somewhere and join the two adults holding line later, I mean first, is the line open enough that that is possible? Second, do you think the people behind us will get more than irritated? The only reason to do this is so the kids don’t go bonkers waiting in line.” 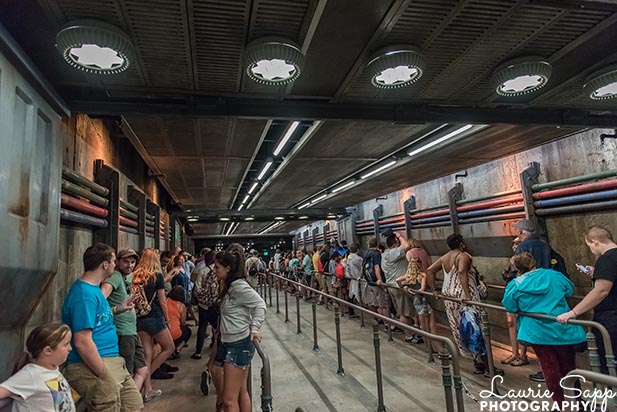 This is the easy part… – Photo by Laurie Sapp

Cheryl, first, no, it’s not doable just because the way the line is set up at Flights of Passage. It is a long, long line that snakes through underground. You can’t get, you can’t come from outside and find a place in line where you can meet up. It’s just not doable.

If you have to jump out and take them to the bathroom, that’s understandable but to have six people come in through a very long line that’s not easy to get through. I mean, you’re talking about four foot, three or four-foot wide line area.

The line is kind of like Space Mountain, Test Track, Rock ‘n’ Roller Coaster. Those rides with long lines where you don’t have easy access to bring people in and out. It’s not a good idea. You don’t want to irritate people like that. I know I wouldn’t like it if somebody pushed by me saying … “I’ve got to catch up with my family.”

Now, how can you avoid that? If you can’t get FastPasses, don’t go when there’s Morning Extra Magic Hours and you be at the park when the park opens, before the park opens so you’re one of the first people in the park. Then, you head directly to Flights of Passage. That way, you’re not in that hour-long line. The line will be fairly short if you go there right away.

Now, if you get to the park at 10:00, yeah, it’s going to be a long line. I looked the other day. It was, I think, noon Eastern and the line for Flight of Passage was 350 minutes long. Probably something wrong with that but lines are still crazy for Flights of Passage.

See more about Flight of Passage at…

IIf you can’t get a FastPass, get to the park early before it opens, 30, 45 minutes before it opens so you’re one of the first people in line to get in the park. Head directly to Flights of Passage and the line shouldn’t be too bad.

I don’t recommend saving places in line. It’s just not practical and is very irritating.