I am also a Dad that loves Disney. We’re taking my 2, 5, and 7 year old to Walt Disney World in February. Was hoping to find out some neat little secrets that we might be able to do to make it a little more special for the kids.

We went last year about this time and the crowds are great so going to try it again. I had heard there may be some things you could ask the characters to get a little more interaction or special responses. Last year, Alice rode the teacups with a little girl. Do you know of any special little things that we may be able to look out for. 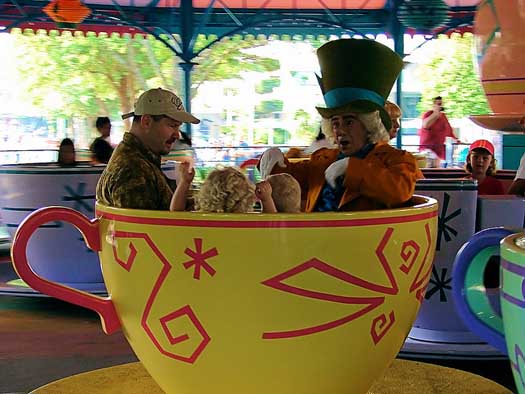 Just watch out for the Mad Hatter Photo by Express Monorail

Dad’s Wish Upon A Star Answer

Seth, as far as Dad is concerned, every moment at Walt Disney World is a special moment full of magic and wonder. You can even plan some extra-special moments… if you’re willing to pay for it. But if we’re going to talk about those extraordinary surprises that sometimes happen, like a free room upgrade or getting to ride the teacups with Alice herself, I’m sorry to say that some things just can’t be planned.

We’ve all heard the stories of a Disney cast member picking a child out of a crowd and asking her accompany a character on Dumbo the Flying Elephant. Now, this certainly does happen from time to time, particularly before characters were confined to greeting areas, but in the last 10 years the character greeting experience has become very streamlined and standardized for the safely of the characters and guests.

I don’t know of any magic words to get the characters to interact in a unique way with your child (although if you find one, be sure to let Dad in on the secret!), but I do have a few tips that might increase your chances of getting extra time with your favorite characters.

One thing you can do is go to Extra Magic Hours. Often, especially during the morning hour, characters will be out and about but people bypass them as they rush off to their favorite rides. This makes lines shorter or non-existent, so you might be able to nab some extra time Daisy, Stitch, or whichever characters are out and about.

If you’re celebrating something special (a birthday, a first trip, etc.) you can get a special button from the front desk of your hotel or from guest services to indicate your celebration. Sometimes characters and cast members will pay special attention to those with buttons.

Finally, it never hurts to ask. If your family is alone with a character with no one else in line, you can always ask if they’d like to take a spin on the teacups. Be prepared to be told no, and keep in mind this is an easier request to pull off for a “human” character (Alice, Snow White, Peter Pan) than a fully masked character (Pooh, Stitch, Mickey).

Now, if you’re willing to fork over a few more Disney dollars, you can actually buy some more special experiences. Character dining is the obvious choice to get more one-on-one time with characters who come over to your table for a few minutes while you enjoy a lovely meal.

If dressing up appeals to your little ones you can have them visit the Bibbidi Bobbidi Boutique or the Pirates League for makeovers. Yes, I said makeovers. Don’t worry though – if you’d like to save a little costumes without the hair and makeup treatment are available for sale throughout the parks.

There are also a couple special experiences for children 4-12. They can attend a Wonderland Tea Party at The Grand Floridian Resort and Spa for characters, stories, games, crafts, cupcakes, and “tea” (juice). The more adventurous can search for treasure aboard a pirate boat setting sale from Disney’s Caribbean Beach Resort in Disney’s Pirate Adventure. Both require fees and advanced reservations.

But not everything costs extra! You can have the older kids on the lookout for Hidden Mickeys – and all of Disney World will become their own private game of I-Spy-With-My-Little-Eye.

They can get up and dance with characters and cast members in the Move It! Shake It! Celebrate It! Street Party, they can be enchanted by Storytime with Belle, or they can attend Captain Jack Sparrow’s Pirate Tutorial at the Magic Kingdom. Or have them join the Jedi Training Academy at Disney Hollywood Studios, and get involved with Kidcot Fun Stops at EPCOT.

Seth, there is plenty to do at Walt Disney World to make your trip unforgettable. I can’t promise that you’ll get any “extra special” attention from the characters, but it never hurts to Wish Upon a Star…