Dad’s Tip of the Week. 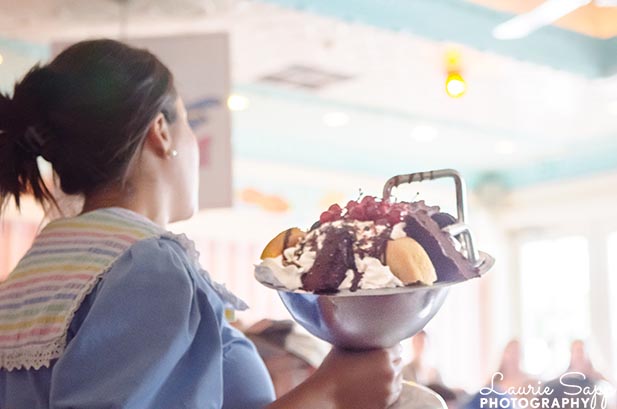 The typical meal at Walt Disney World is pretty big. It’s pretty easy to share. It’s fun to share. It’s really fun to share. Mrs. Mom and I used to do this all the time. We used to go into Casey’s Corner. I don’t think you can do this anymore, but we used to go to Casey’s. We’d both get our hotdogs. I’d order french fries and she’d order the apple chips. We’d share the french fries. We’d share the apple chips. And it was just a great way to save a little money. Instead of buying two french fries and two apple chips, which I think you have to do now with the meals, but we would share those.

Now I know Casey’s has got some bigger hotdog now and you might split the hotdog in half and share the whole meal, but there’s a lot of places where you can share a meal or a snack at Walt Disney World. Now, don’t ask me to share my Dole Whip. I don’t do that, but all the time, Mrs. Mom and I are sharing food and snacks at Walt Disney World. It’s just a great way to save money.

One year we got to the Pop Century late in the evening. We were hungry and this was all four of us, before the kids got married. It was me, Mrs. Mom, and the Man Child and the Princess, and we got there. We flew into the airport, got our rental car and we drove in and we hadn’t had dinner. We’re all hungry, but we didn’t really want to go over to Everything Pop. We don’t really care for the Pop food court at night. We love it at breakfast, but not so much at night. We didn’t really have time or want to go over to Disney Springs or somewhere else and grab some food.

We ordered a pizza and some drink, and we went over and filled up our refillable mugs and we had pizza together that night. It’s a great way to start a trip. Sharing food, it’s not only Simple, it’s not only Fun, but it’s also a little bit Magic. It just creates that atmosphere of sharing and caring. Sharing is caring.