So last year we showed up at Disney excited to see the snow on Main Street but there was no snow to be found. Do you happen to know when the snow appears? Is it just at Mickey’s Very Merry Christmas Party? 4 years ago it wasn’t, I do remember seeing snow once… Thanks! 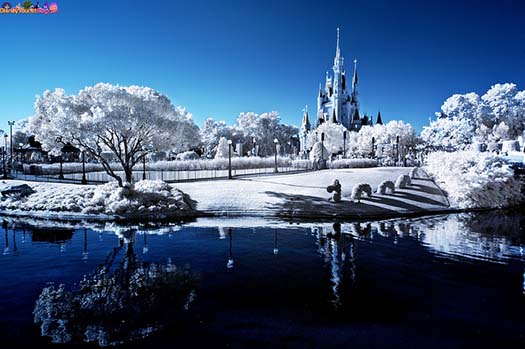 You’ve got Dad into a singing mood! “Oh the weather outside is frightful but the fire is so delightful, and since we’ve no place to go – let it snow, let it snow, let it snow!” Yep, Dad sings good, especially when it comes to Christmas songs. But enough singing about snow, let’s talk about all the ways you can see it snow at Walt Disney World during the holidays – it doesn’t happen to often, but that’s what makes it so special.

If you’ve spent any time at all on Dad’s site, you know that Christmas is my favorite time of the year at Walt Disney World, for so many reasons. There are fantastic shows, holiday character greetings, seasonal treats, and even more of those little touches that makes a day at the Most Magical Place on Earth even more special – like snow on Main Street USA.

The history of snow on Main Street USA goes back to the year 2000 in Disneyland – it was part of an attempt to lure more people into the park right before Disney California Adventure opened. It was so popular it’s been brought back year after year and has even made it’s way out to Florida. Yes, it can – and does – snow in Florida, that’s the magic of Disney!

Nowadays, you can still find snow at Walt Disney World at Christmastime, but only on certain nights. The snow falls regularly on Main Street USA throughout the evening on nights when Mickey’s Very Merry Christmas Party is held, but you’ll have to buy a ticket to the party to see it. If you’d rather not pay the party ticket premium, you can see the same snow effect at the Osborne Family Spectacle of Lights at Disney Hollywood Studios.

Priscilla, if your heart is set on seeing the snow on Main Street USA, you’ll have to give yourself an early Christmas gift and buy a ticket to Mickey’s Very Merry Christmas Party. If you’re just interested in seeing snow in Orlando, head over to the Orborne Family Spectacle of Lights – it’s an amazing show in and of itself!