Soarin’ Around the World is EPCOT’s hang gliding thrill ride. Thrill ride? OK, maybe not a thrill ride, but it is a big E-ticket ride.

If you’ve ever wanted to Soar through the clouds like Carl and Russell in the Disney*Pixar film, UP, then Soarin’ Around The World in Future World is a trip worth taking! 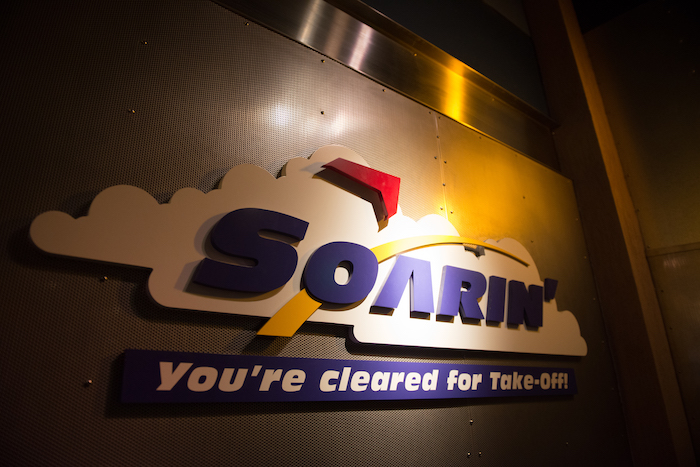 Take a ride around the world on Soarin’ in EPCOT! Photo by Cliff Wang 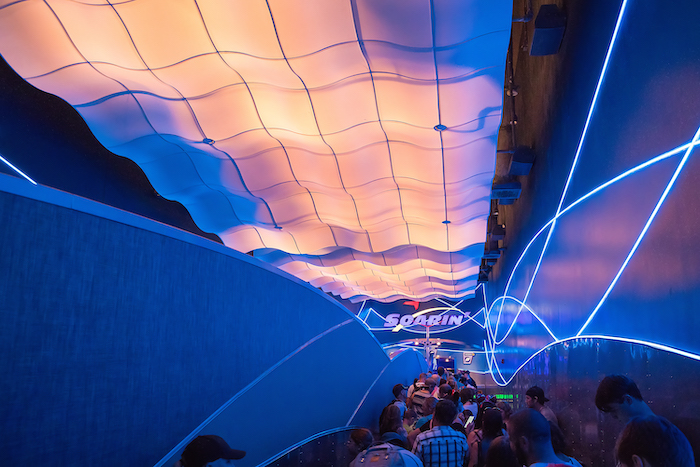 The lines for Soarin’ can get pretty long! Photo by Brett Svenson

Disney has outdone themselves with the preshow for Soarin’. The Imagineers have created the world’s largest interactive video game. It’s a game that’s controlled by body movement of the guests waiting in line.

Dad spends a lot of time talking about how to avoid lines. Everyone should experience the video game walls at least once. It’s a great way to pass the time.

After waiting in line you are ushered into “gates” for a pre briefing and loading. You are shown a video that explains how to get on the ride and how to buckle your seat belt and all the other standard Disney pre-ride information. 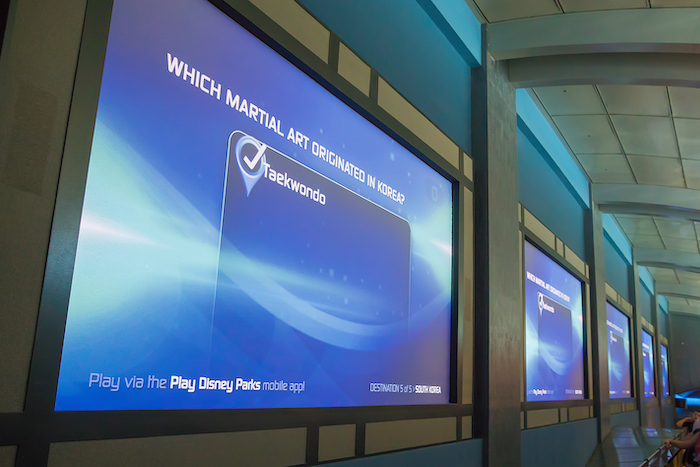 Guests can play games on the walls during the wait. Photo by Brett Svenson

In this ride, Uncle Walt’s boys wanted to create the illusion of hang gliding with Soarin’.

You enter the ride area you are led to one of three levels. Some people say it’s best to sit toward the center of the hang glider. On the edges the video can tend to be a bit distorted.

You walk into the ride area and are led to a oversized erector set that has a row of seats where you sit down and strap in. (It’s a seat belt system like the ones in Star Tours and if you remember it, Body Wars.)

Once everyone is securely confined, the fun begins! You fly past locations such as: Sydney Harbour, Neuschwanstein Castle, The Matterhorn Mountain, Kilimanjaro National Park, The Great Wall of China, Monument Valley, and the Eiffel Tower!

All this in five minutes! Talk about efficient!

Not only do you feel like you are flying but you actually feel the air rushing through your hair. Disney continues to create great illusions with smells that are appropriate to what’s being shown on the screen. You can also feel the wind through your hair as you fly through the adventure. 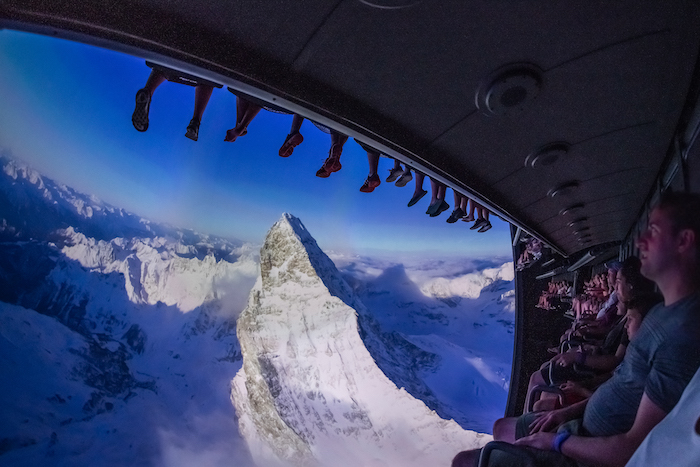 Let your feet dangle as you soar over the Matterhorn Mountain. Photo by Laurie Sapp

The postshow for this ride is walking through really a neat concrete canyon looking up at people that are going to be standing in line for a long time. (It’s really cool.) 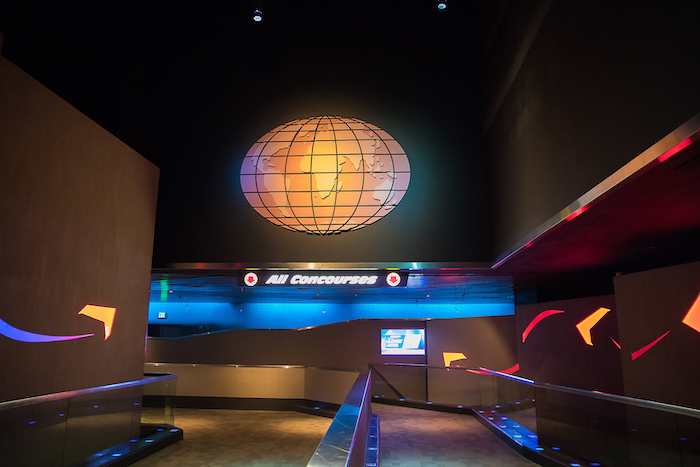 Fastpass+ is available for Soarin’ and could save you some time. Unfortunately, you can only choose one tier 1 Fastpass+ option in EPCOT.  If you have someone in your group who wants “to build a snowman,” with Anna and Else, then you’re better off using your Fastpass+ on Frozen Ever After.

The lines can tend to be long here, so you may want to check this out earlier in the morning–especially if you decide to use your Fastpass+ on Frozen Ever After or another attraction.

If you’re going to ride Soarin’ without standing in line all day, you need to have a game plan. Dad has a couple of resources to help. First there are Dad’s buddies over at Touringplans. They have plans for almost every occasion. Check them out.

Then there are Dad’s great crowd pages. From calendars to tips, Dad has all kinds of tools to help you deal with the crowds at WDW. 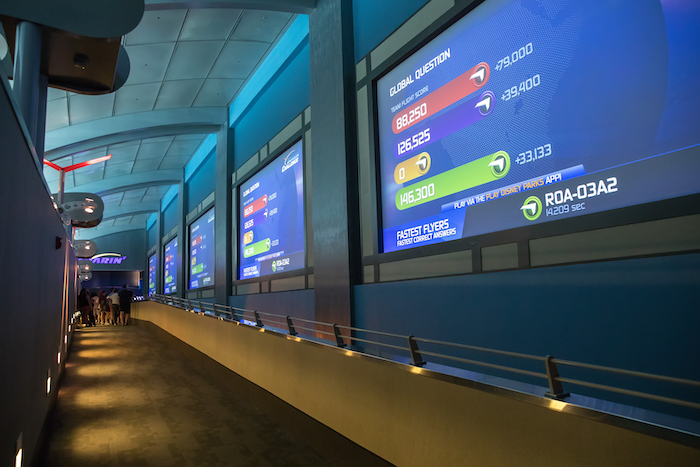 Play games if you can’t grab a Fastpass+ for Soarin’. Photo by Brett Svenson

Soarin’ opened in EPCOT on May 5, 2005. The Disneyland version opened 4 years earlier. 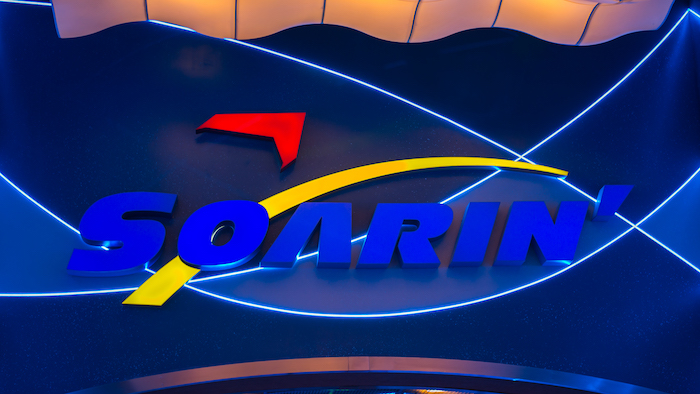 Disney’s Imagineers worked hard to create an illusion of flight on Soarin’. The movie is good, the air current technology is outstanding. The interactive video boards are just amazing.

That said, Dad misses the old attraction that used to occupy this space, Food Rocks!

If gliding around the world sounds great to you, then board your hang glider and get ready to soar!