You don’t have a story/description about the new game at Magic Kingdom. The game is great and has developed a fairly large social following, mostly among adults. Did you play while you were there?? 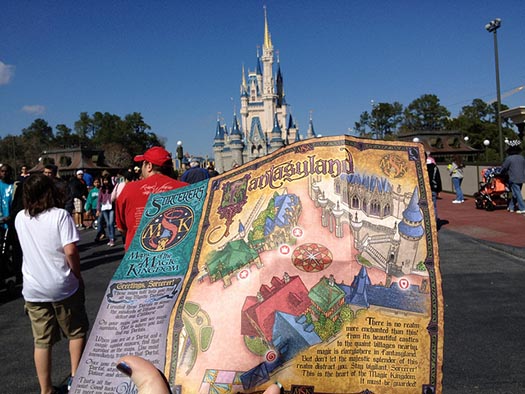 Got your map? Photo by zannaland

Mrs. Mom and I didn’t play Sorcerers of the Magic Kingdom during the Palooza. We are old fuddy duddies and quite frankly we didn’t even think about it.

The other thing is while Sorcerers of the Magic Kingdom is getting more popular, it’s still not very well known. None of the big Disney sites really has any information on it. Disney doesn’t. Allears doesn’t (they have a couple of stories about it, but no page about how it works). WDWinfo doesn’t.

But Dad actually does have a page on it. It’s not great and needs to be updated, but it’s been around for about a year.

This games suffers a bit from a generational bias. Old fogies like us (we’re in our 50’s) really don’t have a lot of interest. We’re not in to the whole gaming craze (although The Man-Child was part of a group that held the world record for playing a board game for about a year). But that doesn’t mean it’s not a great game.

David, Sorcerers of the Magic Kingdom is something new that is catching on, but even Disney doesn’t know quite what to do with it. We’ll have to see how well they support it in the next few years.

I promise next time I’m in the Magic Kingdom I’ll give it a try.