Disney loves to put on concerts. One of the best concert series of the year is the Sounds Like Summer concert series that happens in the summertime (duh) every night at Epcot.

(Dad sings good, you should hear him sometime.) 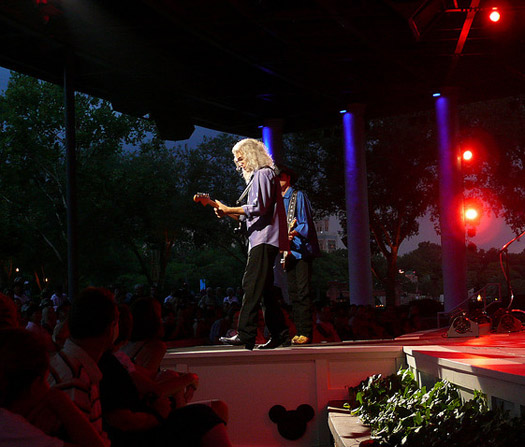 Each summer a bunch of “tribute” bands come to Epcot and perform each night for the Sounds Like Summer concert series. A “tribute” band is a group that plays the music of a well know band. For example, the band Hotel California plays music by the Eagles (the band that sang the song Hotel California). Here’s the list of bands scheduled to perform this summer.

The bands will play for about 45 minutes. It’s usually a rockin show. Although they aren’t members from the original bands, the music is really good. Check it out …

These free extras that Disney adds are just amazing.

The American Gardens Theater is located in Epcot Future World in the America Pavilion. It sits right on the water. It’s an open air theater with a few rows of covered seating. It will hold a couple of thousand people, but the good seats fill up pretty quickly. The theater hosts shows all year around.

If you want a seat in the shade, show up early. The theater usually opens about 30 minutes before each show, but you might have to be in line an hour before depending on the group.

If you’re interested in seeing Sounds Like Summer for yourself head on over to Dad’s Destinations to Travel page and let us help you plan the Perfect Vacation. Trust me, you’ll have a blast.

One of our favorite parts of every trip is to see the entertainment in the American Gardens Theater. We love going over and relaxing and listening to good music and this is some really good music.