Space Mountain is one of Uncle Walt’s crowning achievements. Disney took an average roller coaster, put it inside an unusual shaped building, turned off the lights, added a few cheap effects and before you know it, a timeless classic was born. Uncle Walt was a genius.

This is one of the best rides at Walt Disney World. 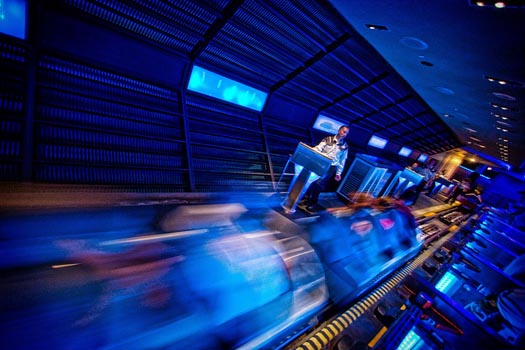 This may be they busiest ride in the Magic Kingdom. Lines develop within an hour of the park opening and grow to 2 hours on a normal day.

This is a FastPass ride and if you aren’t in line early, Fastpass is the best way to avoid the long lines that develop.

The Magic Kingdom is the most visited theme park in the world. Space Mountain is one of the top rides in the Magic Kingdom. Knowing how to beat the crowds on this ride is what Touringplans.com specializes in. They have a bunch of different plans to deal with the crowds. They also have the great smart phone app called Lines that has minute by minute reports on the lines at the rides.

Disney Cast Members sometimes complain about the morning Space Mountain Sprint. Guests of all ages line up when the park opens and run to Space Mountain. If you encounter this you’ll think there must be a prize for being in the first car. There’s not. You can walk and not have more than a 2 car wait. Dad knows, he’s done it.

Space Mountain has an interesting preshow. You step into the futuristic entry and start climbing up to the boarding area. Be careful, it’s dark in there.

Everyone gets strapped into rocket shaped vehicles in Space Port. The vehicles glow in the dark (not really, they just have some decals on the sides that glow in the black lights). The vehicles climb to the top of the180 foot track. During the climb they pass through Mission Control and lots of flashing lights.

At the top guest experience a burst of wind and are propelled through the vast blackness of space. The only lights on the ride are shooting stars, celestial satellites, and constellations and chocolate chip cookies, so guests can not see as they are toss and turned on the ride.

As guests disembark from the ride, they hop onto a moving sidewalk and pass scenes of futuristic homes and business and watch themselves along the way.

This attraction first opened at Walt Disney World on January 15, 1975. 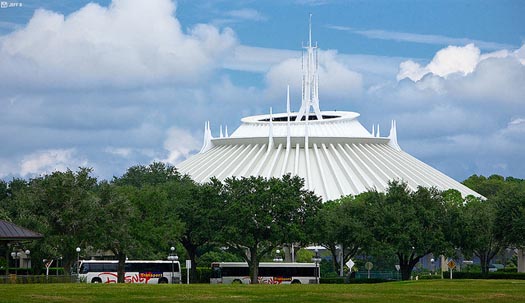 The Riderswitch option is available for this option. If you have a child who is not tall enough to ride or does not want to ride, 1 parent can ride and then the other can ride without having to stand in line twice.

Right at launch, Disney takes your picture. (Smile and say Cheese.) These pictures are just great. Whenever you get into the gift shop you can look at your picture and see if you want to purchase it. Pretty cool, right?

It’s even cooler if you have Disney’s PhotoPass+. You’ll be able to add your picture to your PhotoCD and check it out when you get home.

Don’t miss this one.