Splash Mountain is one of the Magic Kingdom’s busiest attractions. There’s a reason for that. Uncle Walt’s boys have taken a good story and made it better. In 1946, Disney released Song of the South, a story about a rabbit and being chased by a fox and a bear and all the follies that followed.

What makes this ride special is the anticipation of the “Big Drop”. Toward the end of Splash Mountain there is a 52 foot 45 degree drop which will take your breath away. In fact Disney, always looking to make a little money, snaps your picture right as you start down the “Big Drop”. Most people are screaming when the flash happens. It makes for a great picture which you can buy for a measly $49.59 (or something like that.) 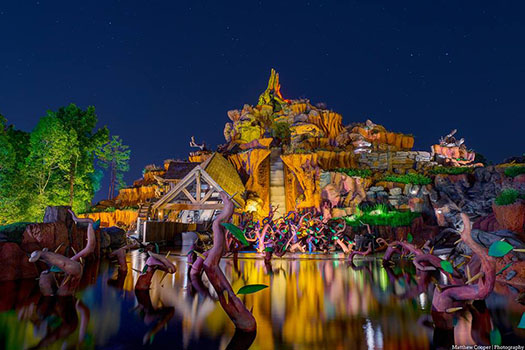 Waiting in line for some of Disney’s rides can be as much fun as the rides themselves. This ride has an interesting line area. It’s a good thing, because everyone usually has to wait a while.

Here you walk through a nice cool Chickapin Hill. It’s covered and cool. It’s a nice place to be on a hot Florida afternoon.

Splash Mountain starts out with Br’er Frog telling guests that they will be taking a wet ride with a big drop. The story goes that Mr. Bluebird and Br’er Rabbit are sitting around chatting one day, and the restless Br’er Rabbit decides he needs to leave the safety of the briar patch and find his “Laughing Place”. Where he won’t be bothered by Br’er Fox and Br’er Bear (say that 5 times fast.)

You make your way through scenes where the rabbit is chased by the fox and the bear. You see how the wily rabbit outwits the slower fox and bear time after time right up to the final fallllllllllllll.

At the end of the ride your reach the Laughing Place. The place where all is peaceful and happy.

Will you get wet on Splash Mountain? Maybe, probably, I don’t know. Yes, that’s a cop out answer, but it’s the truth. If you sit in the front of the ride, you have a descent chance of getting wet, especially if you have very large (like Dad) people riding in the front. You might get soaked.

Riders report everything from not getting wet at all, to getting totally soaked on Splash Mountian. Most of the time, the soaking doesn’t come from the “Big Drop”, but from some of the smaller drops and some of the twists and turns. Shoes, purses and camera bags are the items that tend to get the wettest.

You can always put on one of those great Disney World ponchos to stay relatively dry.

Here are some interesting tidbits about Splash Mountain – 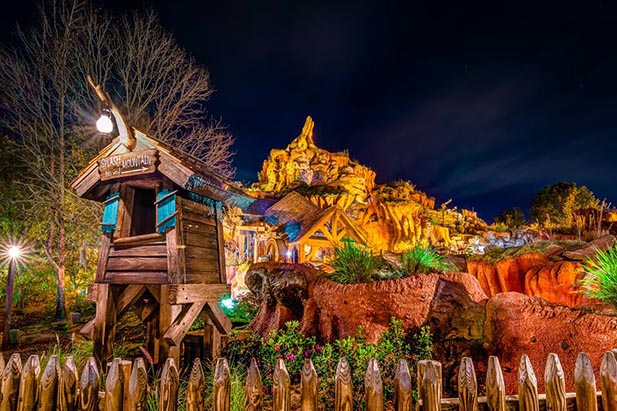 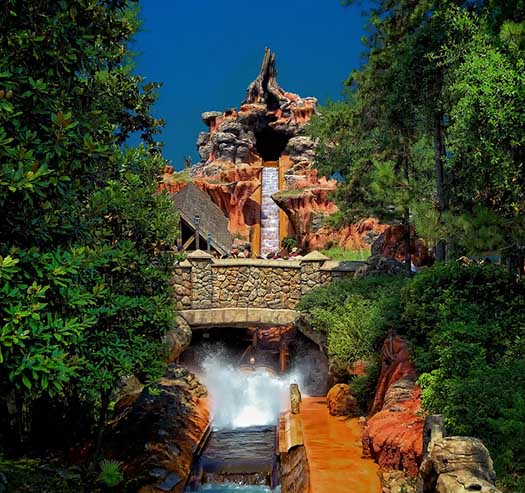 Are you Tall Enough to ride Splash Mountain? It’s kind of funny, but yes, there is a height requirement to ride.

Splash Mountain is one of the “Big” rides at the Magic Kingdom. It should be one of the centerpieces of any Magic Kingdom plan. Lines get long from early in the morning to late at night. Some ways to avoid lines is to ride first thing in the morning, use FASTPASS, or ride during the parades.

Right as you start down the “big drop”, you see a big flash That’s where the big picture is taken. When you exit the ride, you’ll see the pictures on screens. Make sure you get the number so you can buy the picture later.

It’s too bad that all of this great scenery goes to waste on Dad. Being the wimp he is Dad is discomfited (big word) by the 4 early drops waiting for the Big One and misses a great ride. Sorry.