Storybook Circus is taken right out of Dumbo the Flying Elephant. When you walk into the circus, you’re walking back in time, back to the 1940’s to the big top and the big show. Come on let’s explore.

Step right into Carolwood park where Casey Jr. has brought Dumbo and the rest of the circus to town. You can even jump on a the Great Goofini roller coaster and take a ride off into the wild blue yonder. Ladies and Gentlemen … Step right up … See the star of the show … 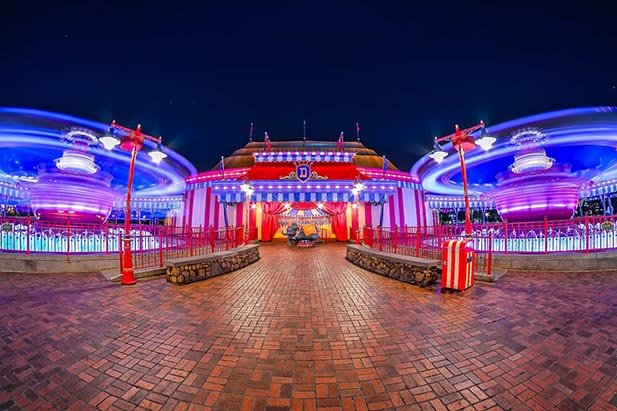 Uncle Walt loved trains. In his back yard he had a miniature live-steam railroad. It was incredibly detailed right down to it’s own logo and name. It was called the Carolwood Pacific Railroad. The Imagineers working on the new Fantasyland wanted to pay tribute to Uncle Walt and Carolwood Pacific and used it as the base for Storybook Circus.

The story goes that the circus has arrived at Carolwood to set up. Now the fun begins.

The big guy himself is the center of attention and the star of the show. Dumbo the Flying Elephant may be the favorite Walt Disney World ride of all times. Since the park first opened, this little guy has been thrilling children every day.

The biggest problem with Dumbo has always been there wasn’t enough of him to go around. Long lines have plagued this great ride. Soon, in Storybook Circus, lines to ride Dumbo will be a thing of the past. There will now be 2 ride vehicles (twice as many chances to ride) and a brand new interactive queue area where families can wait in the air conditioning and play on trampolines, slides and even climb up a “burning” building while waiting to ride Dumbo. 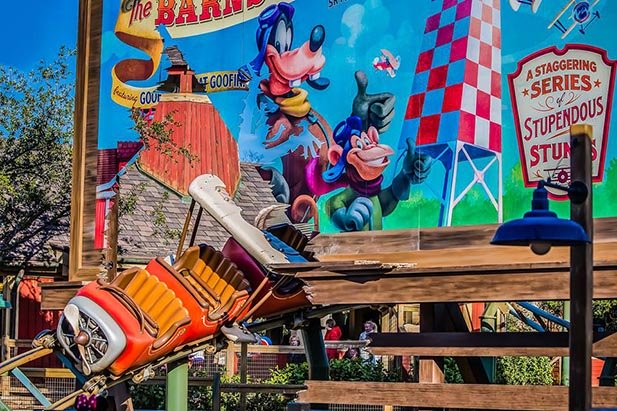 The Great Goofini is not the star of the show. Goofini is the “B” attraction of the circus, but he tries hard. All around the circus you’ll see acts performed by our almost hero. Goofy is everywhere. He’s a canine canon ball, a barnstorming pilot (that flies pretty badly), a tiger juggler he does everything but sweep out the big top (and he probably does that).

The Great Goofini takes children on a Barnstormer ride through a billboard and a lift tower until finally you land safely back at the circus. The kiddos will love this. The old Barnstormer ride has been totally integrated into the new attraction. The new ride still has Barnstormer in the name.

Clown from the Giggle Gang 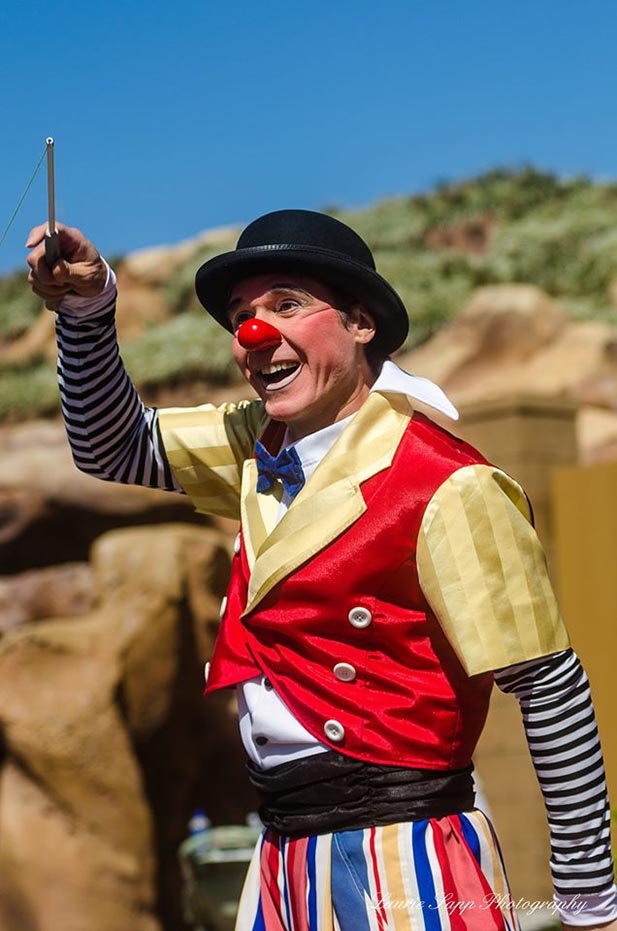 Every circus needs clowns and Storybook Circus has some of the very best. The Gang has arrived to enthrall audiences large and small. The gang includes a clown group and a special musical group that puts a “clownish” spin on all kinds of music.

These clowns are special. Some of them trained at the best clown college on earth. Check out …

Getting Wet at Casey Junior 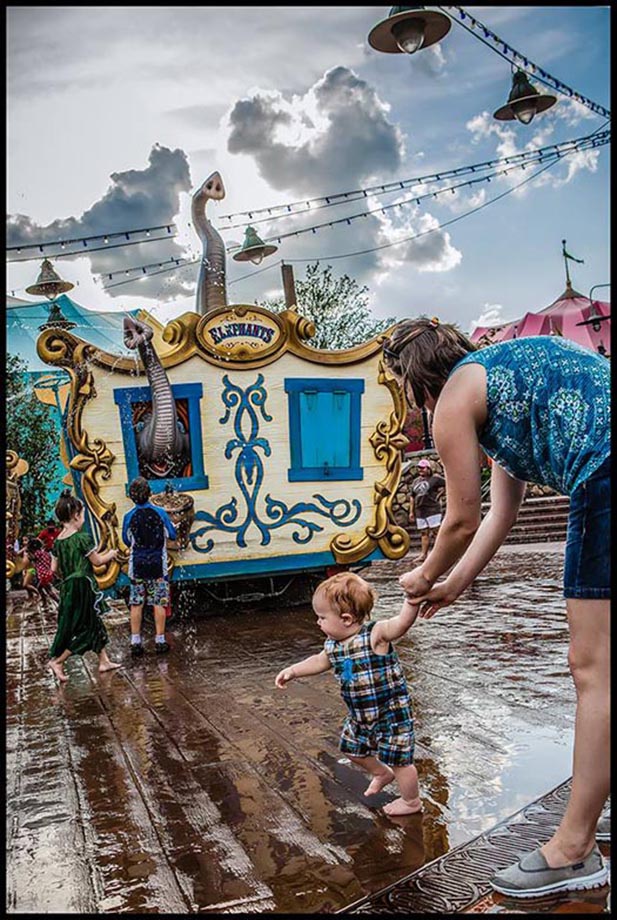 Casey Jr. is the train that brings Dumbo and the circus to town. Casey is a very friendly little engine who’s more than happy to bring smiles to children of all ages even if he has to resort to getting everyone wet.

See Casey pull the giraffes and elephants as everyone gets ready to see the “Big Show”.

There will be a character greeting area called Peter’s Silly Sideshow. This is where you can see some of the prime Disney characters in some circusy roles. For example, Donald Duck might be “The Great Donaldo” a snake charmer from the Far East. Expect to see Mickey, Minnie, Donald and others.

The Fantasyland Train Station has been redone to fit the Storybook Circus theme. Step off the train and step right in to Carolwood park and the circus. Bright colors have been added. Train tracks run into the turning station (that’s where the bathrooms are). 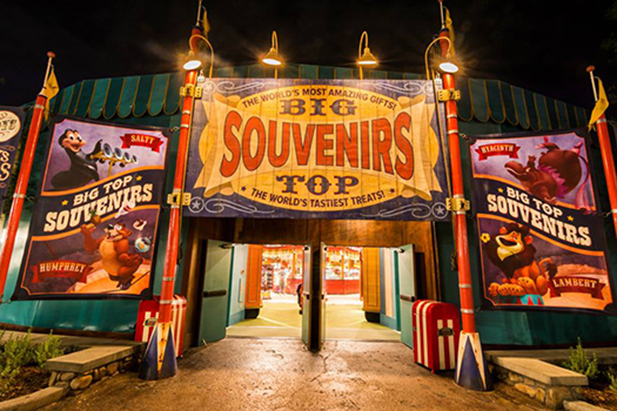 Big Top Souvenirs is not your normal souvenir stand. Not by any means. Every circus needs a big top and Storybook Circus is no exception. There is much more to the Big Top than just a puny Disney souvenir stand.

Under the Big Top you’ll find souvenirs (of course) but also this is where you’ll find refreshments. At Big Top Treats, you can watch your cotton candy, caramel apples and several new cold drink treats created in the “show” kitchen. There are also hot dogs and pretzels and I’m sure a surprise or two.

“Tickets, get your tickets …”

With new attractions come bigger crowds and longer-than-average lines, so Dad always suggests having a plan for Storybook Circus and the rest of the Magic Kingdom to get the most out of your day in the park. Head on over to Touringplans.com – they’ll help sort you out with info on the best days and times to visit the parks, suggested touring plans to avoid the crowds, and even a mobile app to help you keep track of the lines while you’re in the parks!

Even Tangled gets into the act 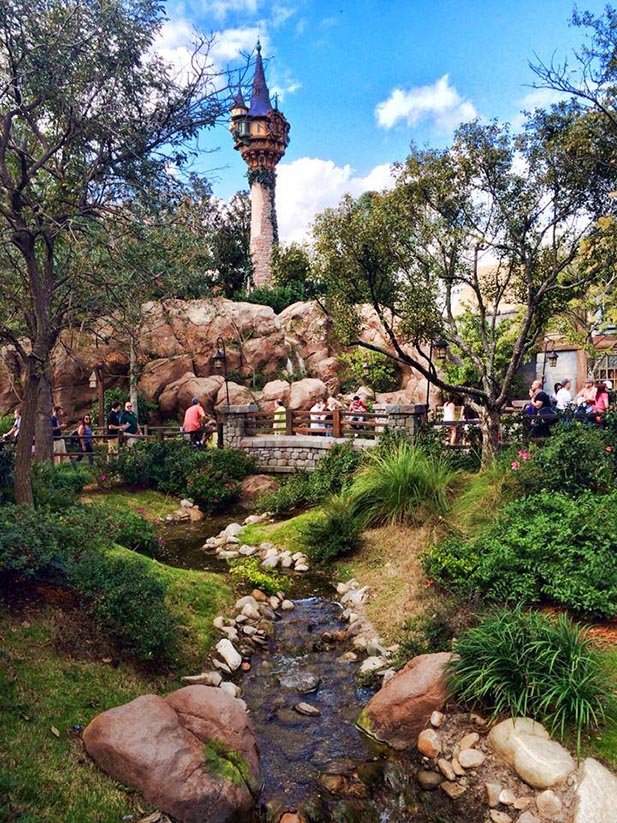 Storybook Circus is a great start to the New Fantasyland. It will be fabulous when the dueling Dumbo’s are complete. This place is really cool. Check it out.