Like many others who fell victim that visiting Disney World during the first week of December was a good idea (travel dates of 11.30-12.5), I just read a double dose of sort of bad news. First, though the ‘official’ date(s) have not been announced, Magic Kingdom usually films the Christmas Day Parade the first weekend of December, with this year being December 2nd & 3rd. With this knowledge, do you advise that I avoid the Magic Kingdom that Friday and Saturday? I was originally going to Magic Kingdom on Saturday, but may switch and go Thursday instead. I would guess it would be less crowded on a Thursday compared to a Saturday anyway.

Second dose of news is that I found out that Pop Warner Football and some cheerleading groups will be in the park as well. Good news is that the football kids do not arrive until 12.4. But, the cheerleaders arrive on 12.1, and just my luck, they are staying at my hotel (Coronado Springs). Is there anyway you could make them stay somewhere else (!) or can I request a quiet room away from all the chaos. Thankfully they will be busy during the day, and most likely will be going to the MK at night.

Any help will be greatly appreciated. 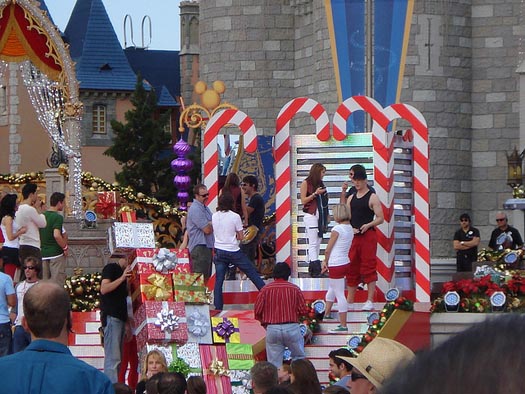 Dad’s it depends on the weather Answer

The Disney Christmas Day Parade is one of Dad’s least favorite Christmas at Disney World happenings. It makes for a good show on Christmas Day, but it’s not a great event to watch being created, it’s only for one day and it can really mess up the crowds at the Magic Kingdom.

I’d plan for Thursday at the Magic Kingdom, (unless when Disney starts giving out tickets for the taping they change the date to Thursday) that way you’ll miss all the crowds and lines.

About the Pop Warner Cheerleader and Football Championships …

I would be very surprised if many cheerleader teams were at the Coronado Springs Resort. Most of the teams stay at the Value Resorts. There might be a few teams at the Coronado but it shouldn’t be overrun and should be fairly quiet.

The Coronado is a huge place. Disney is pretty good about grouping the groups (like how that flows?) and keeping them away from most guests. Just ask your Travel Agent (I hope you used Destinations to Travel) or let Disney know in advance you’d like a quiet room.

Keith, even with all the extra stuff going on the first week of December is really a great time to be at Walt Disney World. Yes, the parade can cause a few headaches (but you can avoid those), yes the Pop Warner kids can get a bit annoying, but they really aren’t that bad. Hey, it’s Disney World. Enjoy!