We’ve been looking at some of the top things Dad likes about the parks and now it’s time to check out the 5 things I LOVE about Disney Springs! 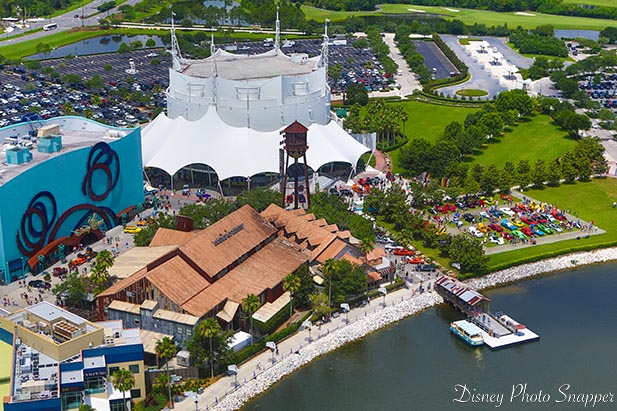 Disney Springs has really changed. A few years ago, Downtown Disney (now Disney Springs) was getting to be a place that I didn’t really want to go to. There just wasn’t a lot there. Oh, there were some cool things there, but it wasn’t somewhere where I would plan to go when I go on our trips.

If there was something going on, we’d run over there, but that has changed over the last couple of years, with the change to Disney Springs. The new things at Disney Springs are really cool, and Disney Springs is becoming one of my go-to places when we go to Disney World.

In fact, we’ll talk about a little trip we’re going to take in January. Mrs. Mom said, “We’ve got to go to Disney Springs and get some Wolfgang Puck Express.” I’m in! 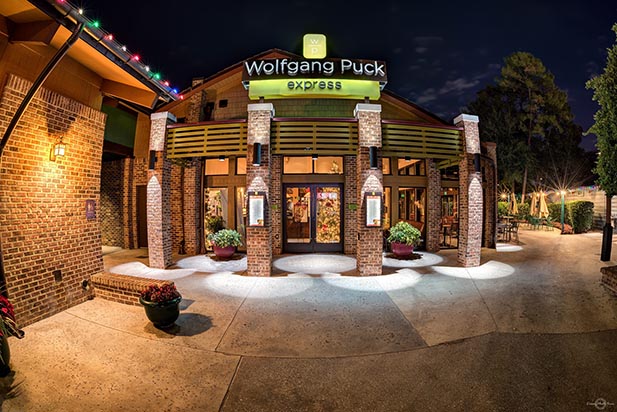 Wolfgang Puck Express is my favorite, by far, quick service restaurant at Walt Disney World. Cosmic Ray’s Starlight Café is kind of a close second, but Wolfgang Puck Express is just really, really good food at, for Disney, a reasonable price. You get a half a chicken, and green beans, and mashed potatoes for under 15 bucks, I think, if I remember right.

For Disney, that’s a really good deal. I really enjoy Wolfgang Puck Express. We are getting to where we planned it, we’ve been there the last three trips. We’re going next month. It’s pretty much our go-to place when we got to Disney World. 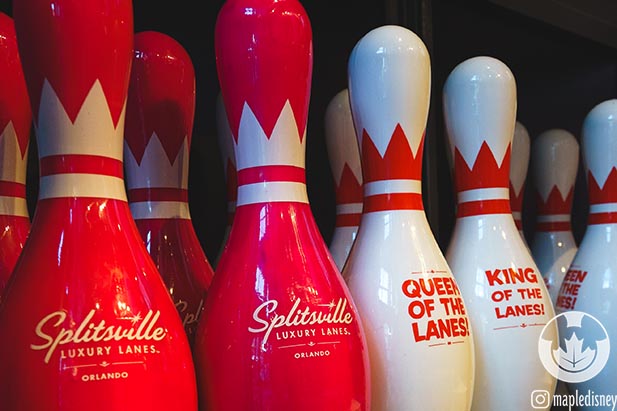 Who’s up for a little bowling? – Photo by Rich Ramos

The second thing that I love about Disney Springs is Splitsville. Now you say, “Bowling alley, how boring is that?” Well, Splitsville’s not your normal bowling alley. The old bowling alley, at least I grew up with, were smoky, and yucky, and nobody went there unless they were in a league, and it was kind of a dirty, dingy place. That’s not Splitsville. Splitsville is a cool place.

The food is surprisingly good. I know we’ve had pizza, and sliders, and french fries, and all kinds of stuff, but the food there is surprising good. So the number two thing I love about Disney Springs is Splitsville. 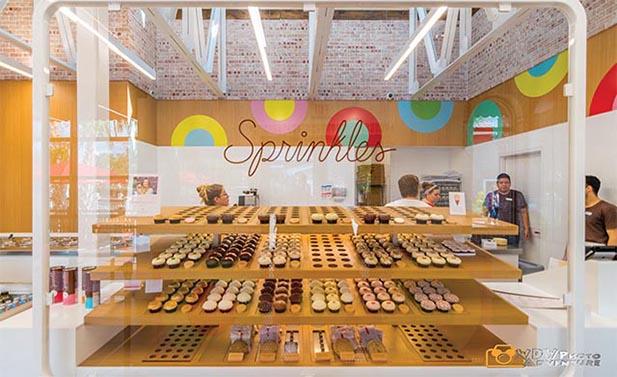 Which one should I choose? – Photo by Wayne Wood

Number three, while we’re talking about food, the number three thing I like about Disney Springs is Sprinkles, Sprinkles Cupcakes.

We went to Sprinkles for the first time last year. It was our first night we got to the Disney World, we went to Disney Springs, ate at Wolfgang Puck’s, then went over and got some cupcakes at Sprinkles. We’d never tried their cupcakes before, but that place is kind of cool.

It’s got an ATM. It’s got a place where you can outside, where you can buy cupcakes in an ATM. We went inside, they packaged up the cupcakes really, really nice, and it actually took us a couple days to eat them, but man, when we started, we finally got into those cupcakes. The best cupcake I’ve ever eaten was that cupcake from Sprinkles. It was a chocolate velvet cupcake, I want one right now. I love that cupcake at Sprinkles. 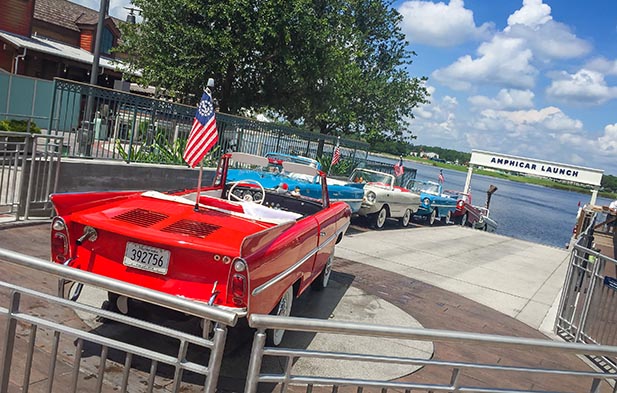 Ampicars are so cool! – Photo by Judd Helms

All right, so the fourth thing I love about Disney Springs is the Amphicars, the new cars that ride in the water. Now, that’s just sounds so cool to get in a car, and go for a nice romantic drive, sun setting in the west, and go for a ride in a car, in the water, at Disney Springs. I don’t want to do it when it’s cold, but summertime, nice cool breeze coming over the water when it’s hot, it just sounds like a wonderful way to do things in the evening. I haven’t tried it yet, but one of these days we’re going to try one of those Amphicar rides. 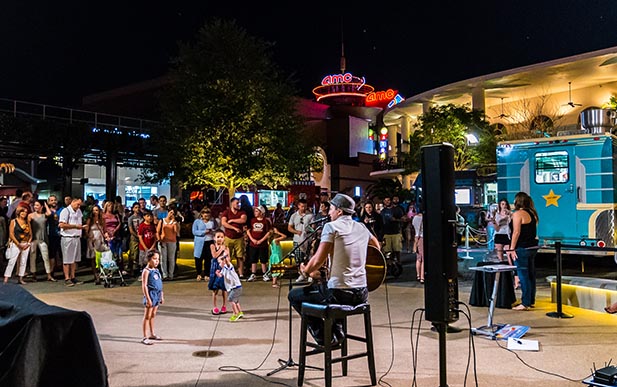 The live music is pretty cool – Photo by Andy Sanchez

The fifth thing I love about Disney Springs is the new ambiance, the feeling, the atmosphere, the live entertainment going on all around, the people walking around seem energized. They’re not walking with their heads down just trudging to their next … “I got to check this off, because I’m supposed to get something at this particular place.”

It’s become brighter, and happier, and just a whole lot more fun. I really enjoy going over to Disney Springs and just spending some time walking around, sitting around and just soaking in the feel.

Oh, and I don’t want to forget, this one kind of … Okay, shopping. Let’s do one shopping thing. Let’s make it a six thing. The Disney Store.

The World of Disney 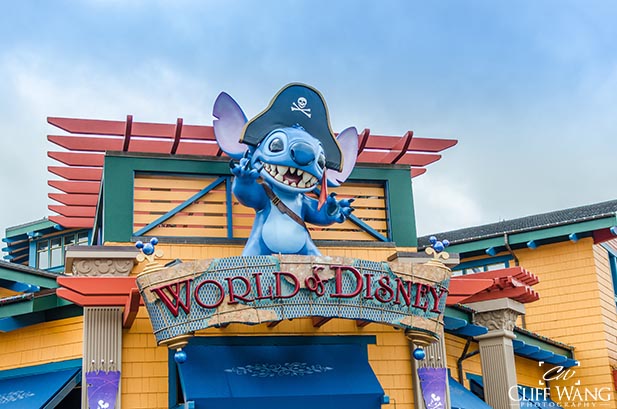 She didn’t even know about it. They got back to the room, he gave her the birthday present. “When did you get this?” “While you were in the World of Disney store.” It’s that big.

The bottom line is I just love going to Disney Springs now. It’s just so much fun. The Wolfgang Puck Express, Sprinkles, Splitsville, the Disney Store, the Amphicars, and the feeling, the ambiance. It’s just a whole lot of fun.

What do you love at Disney Springs

What do you think about Disney Springs? Do you like it? Do you hate it? What kind of experiences have you had over there? Put it down in the comments, I’d love to hear what you think.