Back to the non-virtual honeymoon snippets.

I have to say the Prince Charming has led a bit of a sheltered life. He had never been to Disney World.  Ever. What’s up with that. A full grown adult that has never been in a Disney park. What a shame. The Princess was only too happy to lead him by the nose …  I mean show him around her favorite place in the whole wide world. (She is her father’s child.) 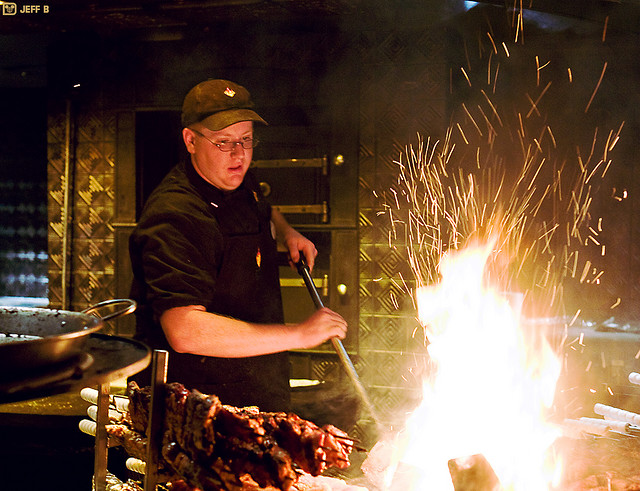 The first Advanced Dining Reservation the happy couple made was at ‘Ohana because it’s our favorite place to eat and since Prince Charming didn’t have any idea about what to do, like any good groom, he just smiled and said “whatever you want honey.” (That boy is going to go far.)

When the honeymooners arrived at ‘Ohana, they were obviously recognized by the Cast Member at the podium because they were instantly ushered to the Perfect table at the restaurant. That corner table where you have the Perfect view of the Magic Kingdom which was a great thing since they were planning to watch Wishes from the restaurant.

Prince Charming had heard from all of us the stories of ‘Ohana and our love for the food. I don’t think he had put a lot of stock in our ranting and was just humoring the new bride. That changed before the evening ended. When the food started arriving, Prince Charming was a bit overwhelmed. He, like a true man, skipped the green stuff and went right for the meat. He even skipped the Jumbo Shrimp and went for the meat.

When he got back I talked with him a bit about ‘Ohana because the Princess had told me he LOVED it. I asked him what he thought of our little secret. His direct quote to me was “it was the best meal I ever ate”.  He told me the steak was the best steak he had ever had. I thought I was watching the Food Network Show “The Best Thing I Ever Ate” while he was describing it.

I have to say again that the boy has led a sheltered life and he has never had one of Dad’s steaks. (Dad makes the best steaks in the world. Don’t believe me? Ask Mrs. Mom.)  Dad loves ‘Ohana, but it’s not the best thing I ever ate. He also said he had never had a steak cooked over a fire. (Never cooked a steak on a grill?) He may have been exaggerating a bit.

The steak at ‘Ohana is good, but not the best thing ever.  I think the boy was just love struck. He was in the most romantic place in Disney World, sitting with the love of his life, maybe his brain was clouded a bit, but at least he enjoyed it.

Then after a Perfect meal, the Perfect fireworks show started.