According to the person who will remain nameless (Dad doesn’t know their name and isn’t particularly interested in finding out), June 6 is 180 days before the best day on of the year to arrive at Disney World. Yes it is important to make your dining reservations 180 days prior to your arrival date, and if you were arriving at Disney World on December 4, this day would be very important. But …

The week of December 4 is not, in Dad’s not very humble opinion, a good time to visit Disney World. Why, you might ask? Let me tell you. Years ago, (probably about 10) the first full week in December was the best week of the year to visit the most magical place on earth. But then all of the guidebooks started talking about how the first week of December was the best time to visit Disney World.

The first hint of a problem came when that week started to be one of the hardest for Disney Vacation Club member to book. Several years ago, Disney signed an agreement with the nice folks at Pop Warner to host the football and cheerleader championships the first full week of December.

Yes, I know the guy who should remain nameless says the Pop Warner problem is a myth and when you talk about daytime crowds in the parks he’s right. Evening crowds are a different story. In the evenings you’ll see large numbers of largely unsupervised teens and preteens roaming through the parks.

The parks aren’t the big problem. The Resorts and discounts are. The first week in December is one of the hardest weeks of the year to get a reservation for a Disney Resort. The All Star Resorts will be totally sold out very early. (The Pop Warner teams usually end up in the All Star Resorts, though you will see some teams in the Pop Century and some of the Moderate Resorts.) The rest of the resorts will be busier than either the week before or the week after. 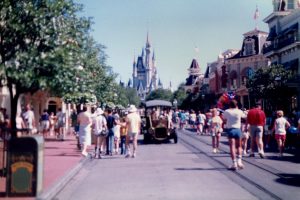