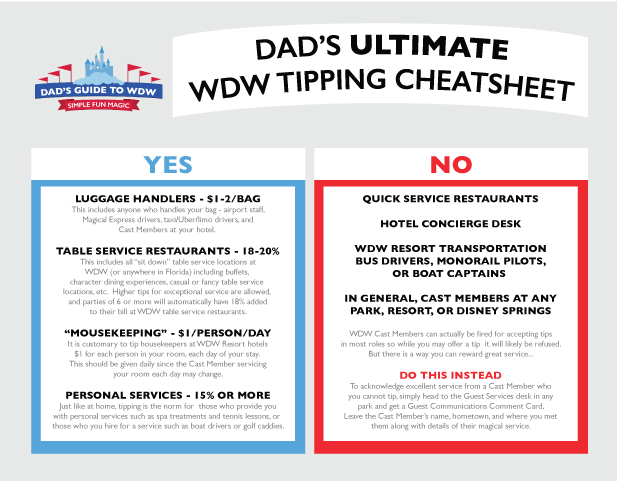 Who you should tip

You can carry your own luggage back and forth and not have anybody else touch it, that’s fine (you don’t have to tip yourself, but you can), but if you use the services in the airport, the guys that have the carts that push your luggage. If you go on Disney’s Magical Express and you leave your bag with the bus driver, if you go in a taxi, any time somebody handles your luggage, including the Magical Express people that take your luggage when you’re getting on the plane to come back, you should tip them one dollar or more per bag. Two dollars if it’s a big heavy bag. So, luggage handlers, even the guy that drives the shuttle to the parking lot at your local airport, one dollar per bag.

Mousekeeping, housekeeping, whatever you want to call it, this is one that for years nobody did, but it’s kind of become standard that you should tip one dollar per day per person in your room. That means if you have five people in your room, that’s five dollars a day.

Next comes personal services. You go to the spa, you do something with a boat and there’s a boat driver, you get instructions, tennis instructions, something like that. Any kind of personal service like that, typical is 15% or more if they do an outstanding job, 15% or more of the total bill. All of these are before tax, any time you can look at the bill before the tax and 15%, 18%, 20% before tax. So personal services should tip 15%, this is kind of the same as you would do at home. I go get my hair cut, I go to the haircut place, I tip. So it’s kind of the same as you would do down there.

Who not to tip

Now, let’s talk about who you don’t need to tip, who you probably shouldn’t tip. Quick service servers, so if you’re at a quick service restaurant, Casey’s, Be Our Guest for lunch, I was very surprised. We went to Be Our Guest two weeks ago, we were there for lunch, and those servers do a little bit more, they bring the food to your table, there’s a little more interaction, it’s not like Casey’s Corner where you pick up your food, you go to your table, you get your own stuff, you get your own drink.

At Be Our Guest at lunch, yes you get your own drinks, but there’s a little more interaction with the server. So we thought it would be nice to tip the server, and we talked to her about it and she said, “No, we don’t accept tips at lunch. We have to take them and we have to put it in a, and we don’t see it. It just goes to Disney.” So, the quick service people including Be Our Guest at lunch you don’t tip.

Cast members, another one is cast members around the park. They can actually be fired for accepting tips, so it’s one of those, while you think it’s nice to offer, talk to them before you actually offer them money so somebody doesn’t get the wrong idea. Ask them if they can accept tips. If there’s any question just ask, “Do you accept tips?” Then you can tip.

How to thank them

There is an official comment card for cast members at all the park’s guest services location. You get that comment card, fill it out, make sure to get the cast members right off their name tag, get their name and their home town, fill out that comment card. That does more for them, most of them, for the non-tipping ones, that is what shows management that their doing a good job. They get a lot out of those good comments.

So, do when somebody does something above and beyond, get their name, get their home town, fill out those comment cards. Wait till you get home, when you get home you can write. There’s an address, we’ll put it down in the comments, there’s an address you can send it to, and just send a comment. Be sure you’ve got the name, where they were, describe what happened, and name and home town, and send it into Disney. That really helps those cast members. Disney does pay very close attention to those kind of comments, and it really can help them. Helps them get promotions, all that kind of stuff.

The bottom line is tipping is important, who you can and who you can’t tip. The people you can tip, they depend on that for their livelihoods, they don’t get standard minimum wage, or their wages are reduced for expecting those tips. So it is important to tip those people that do services for you, it’s a great way, just be generous, be happy, you’re at Disney World! And in life, it’s just the attitude, as I hear a lot, the attitude of gratitude. Be thankful when people help you out, it’s just a good thing, be thankful.