We are planning our first family trip to Walt Disney World during Mardi Gras holidays 2014 (we are from Mobile and get the week out of school and free vacation days.) My questions are is this a crowded time?

We are basically putting our park time into March 1st through third. Our boys will be 10 and 1 1/2 when we go, I believe we can do without EPCOT but are there any must for the little guys? We are taking grandma and she will require a scooter rental so is there any places that aren’t a good idea to take her? Any comments on Staybridge Suites in Lake Buena Vista? 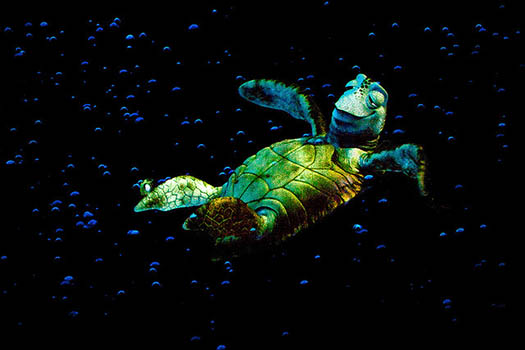 You won’t want to miss Crush Photo by Jeff_B.

It’s great to hear that you’re planning ahead for your family’s Perfect Vacation! As they say, knowing is half the battle, and Dad things that planning is the best path to knowledge when it comes to a Walt Disney World Vacation. Since you’re planning a trip with three generations, there is a lot to consider. We better get started!

2014 is a long way away by Disney standards! In fact, you won’t find any pricing or be able to book your reservations for quite some time. Even Dad’s crowd calendars only cover 2013 at the moment (Dad’s good, but not that good – he can’t see that far into the future!). Based on the crowd projections for Mardi Gras 2013 (in February) and early March 2013, I think you’ll be fine. Crowds should be low to medium at worst.

Since you’re traveling with the whole family, Dad has some great tips to help you avoid crowds. But the best one of all is to get some professional help in making your PLAN. The folks at Touringplans.com can really help you – they have suggested plans for each park that will help you maximize what you can see and minimize your time in line – which is especially important with a toddler, pre-teen, and senior in tow.

In terms of which parks to visit, you’ll definitely want to go to the Magic Kingdom and Animal Kingdom. You can’t do Walt Disney World without the Magic Kingdom – it’s the perfect park for every member of the family. Animal Kingdom is great for families too – it’s a bit smaller than the other parks so you can take it slow, and there are lots of colors and animals to keep young and old entertained.

I understand your initial inclination to cut out EPCOT and visit Disney Hollywood Studios instead, but here’s some food for thought. In the past few years, EPCOT has become remarkably kid-friendly. There are character greetings in Future World and all around World Showcase. It’s got The Seas with Nemo and Friends and Turtle Talk with Crush, craft stations throughout the park, and Phineas and Ferb: Agent P’s World Showcase Adventure.

On the other hand, Disney Hollywood Studios is built for thrills. Most of the attractions are kind of rough and depending on your 10 year old’s height and adventurousness, he may not want or be able to ride. There are lots of shows, but many of them are excessively loud, with lots of explosions. There are few character greetings and only a couple of kid-centric attractions. It may not be a very good fit for baby and grandma.

But, it’s your call, so lets talk about what your boys can’t miss! Frankly, your 1 1/2 year old won’t remember much, and will likely be afraid of most rides, and maybe even characters. Toddlers tend to like the pool at the hotel more than anything, but you can let him play at Casey Jr. Splash ‘n Soak Station at Magic Kingdom. Other good choices at that park are Dumbo, King Arthur’s Carousel, and the interactive queue at The Many Adventures of Winnie the Pooh.

There is a lot more for your 10 year old son to enjoy at Walt Disney World. At Magic Kingdom, check out Pirates of the Caribbean, Monsters Inc. Laugh Floor, Buzz Lightyear’s Space Ranger Spin, Astro Orbiter, Tomorrowland Speedway, and Splash Mountain (or any of the mountains he’s adventurous enough to try)

And for your last two questions: All Walt Disney World theme parks are scooter accessible so you won’t have a problem moving through the parks. Finally, Dad always stays on-site at a Walt Disney World Resort Hotel when visiting the most magical place on earth, so no comment on the Staybridge Suites. Stop back after your stay and let us know how it is!

Jenn, your trip is a while away and since you’re planning now you’ll be in great shape by the time March 2014 gets here. Have a magical vacation!