Tomorrowland is Dad’s favorite land. It’s the place where our family starts our day. THE PLAN for the Magic Kingdom always starts with a race for Space Mountain and Buzz Lightyear. (Buzz is Dad’s favorite ride.)

The best rides in the Magic Kingdom are here! There are some absolute gems here. Tomorrowland Transit Authority may be the most underrated ride anywhere.

The future that never was and always will be 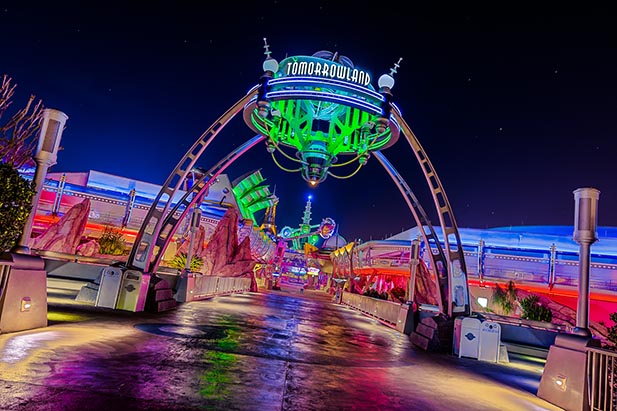 The attractions here are unmatched anywhere in their innovation. 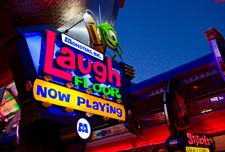 Monsters, Inc. Laugh Floor – Come and be part of a pretty cool comedy show based on the movie. It’s a riot and some good clean fun.

The City of Monstroplis is powered by safe, clean laugh power and is dying from lack of power. Your mission is to help. Sulley and Mike Wazowski lead a cast of characters in an interactive show full of fun and laughter. 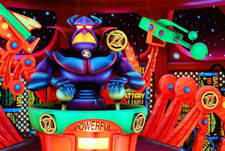 Buzz Lightyear’s Ranger Spin – This is Dad’s favorite ride at Walt Disney World. It’s taken from the Movie Buzz Lightyear. The Evil Emporer Zurg has to be stopped from destroying the galaxy. That’s where you come in.

You compete with your partner by shooting targets all around. The farther the target, the higher your score.. May the best cheater win (how to score points on Buzz Lightyear). To infinity and beyond.

Tomorrowland Transit Authority – This is truly what Tomorrowland was meant to symbolize. Technology of the future. It’s right here and it’s been here for almost 40 years.

Take a ride through Space Mountain and all around the land on one of Uncle Walt’s most fascinating inventions. Linear induction motor transportation. Just slightly ahead of his time

Astro Orbiter – Take Dumbo, spin it up at 4 times the speed. Put it on top of a 60 foot tall building. Yikes.

This is one of those rides that gives Dad a headache. Located on top of Rockettower Plaza this is a colorful adventure.

Round an round. High in the air. All the ingredients are there. The only good thing about Astro Oribiter is you get a good look at all of Tomorrowland. 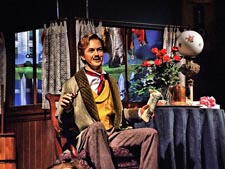 Carousel of Progress – See the progress civilization has made over the last 100 years. It’s amazing to see how fast we are progressing.

This may be the most dated ride in Tomorrowland. It needs a makeover. But it’s still an Uncle Walt Classic.

Uncle Walt was fascinated with the progress the country had made in such a short time, and built this ride for the Worlds Fair of 1964. It’s stil a lot of fun to imagine “a great big beautiful tomorrow …”

Space Mountain – Take a cheap, cheesy, roller coaster, put it inside a building and turn out the lights. Now project some stars and some chocolate chip cookies onto the ceiling and what do you have? One of the best rides in the Magic Kingdom.

Space Mountain was the first roller coaster in the dark. It’s not the fastest in the Magic Kingdom, but it sure seems like it. This is one of the best rides anywhere.

Tomorrowland Speedway – Drive like the pros, not really. Let the little ones try their hands at being Jeff Gordon. You can reach a whopping 5 mph on this winding track.

This ride really doesn’t fit in Tomorrowland, but it’s a classic and always has long lines. Check it out.

The colors are amazing at night 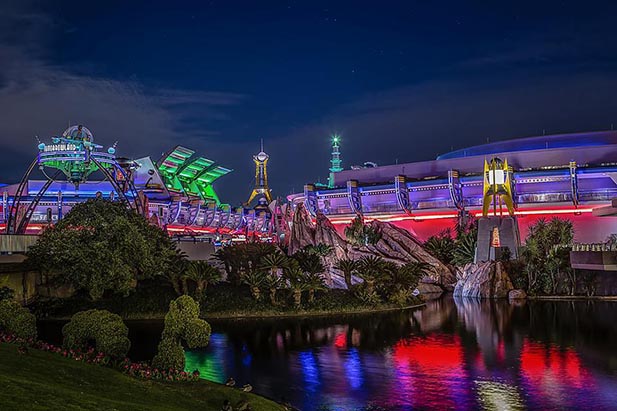 Shopping in this area is an afterthought. Still, there are some pretty neat stores here.

The dining, if you can call it that, in Tomorrowland has gotten better over the years. The addition of the Noodle Station is a welcome change to the hamburgers and hot dogs that are the main menu item at most of the restaurants.

On selected days you might see high school bands performing, or special groups doing special things. Check out the daily activity schedule on the park maps. 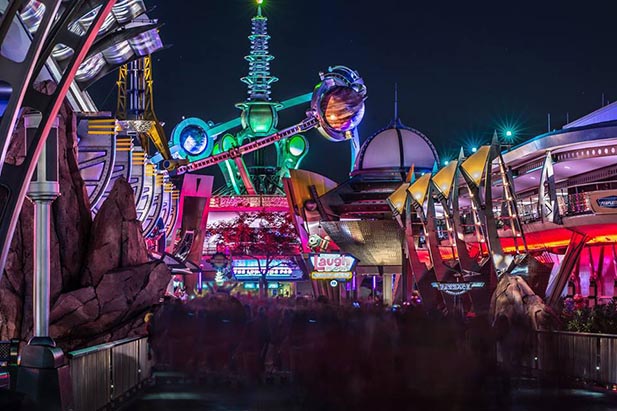 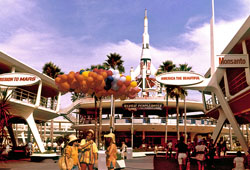 When the Magic Kingdom opened in 1971 Tomorrowland what the main draw. It is also the Magic Kingdom land that has evolved the most through the years. Uncle Walt’s original plan envisioned an area where guests would be able to take a peek into the future.

The land was filled with rides like Mission to Mars, Astro Oribitor, Dream Flight and WedWay People Mover (now Tomorrowland Transit Authority). These rides all showcased the technology of tomorrow. Unfortunately tomorrow has a bad habit of becoming today.

So Disney, in a unusually adaptive move, changed the theme of the are to “the future that never was.”

Over the years some of the old favorites have been upgraded, WedWay became TTA, and some have been replace by better attractions, Dream Flight became Buzz Lightyears Ranger Spin and some have just gone away, Mission to Mars.

This is Dad’s favorite part of the Magic Kingdom. Even the “old” rides are incredible. The ride around the park on the Transit Authority is the best view of this part of the park you can get (since they tore down the Skyway.) There’s something here for all ages. Buzz Lightyear’s Ranger Spin is one of the best rides anywhere especially if you have competitive kids. I just love beating them!

Not to be missed!