I’m going back in late September and just found out I get to use the new FastPass+ feature. With this great power I’m overwhelmed with the best way to use it. I get to pick 3 attractions a day and the times I want to go to them. I’m taking 6 kids (13-1) and 4 adults. Do you think it would be best to pick the later times when the parks are more crowded or go with spreading them out through out the day?

If you could pick 3 from each park that are at times difficult to get a Fastpass too or the lines get long what would you go after? 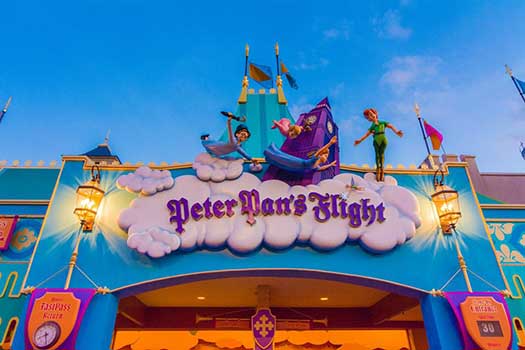 Yes, you might consider this for FastPass+ – Photo by WDW Shutterbug

First let me apologize for not getting to your question before your trip. I’m a little backed up on the questions right now, but here’s what I would have said.

The new FastPass+ system is a huge technological leap forward for Disney, but they’ve had years to prepare for it, and many guests are feeling overwhelmed with the new options and rules. It’s perfectly natural to be a little unsure, but you’ve come to the right place! Dad’s been staying on top of all the FastPass+ news and developments and has some great advice to share.

Since you are going in September and that’s a low-crowd level time of year, you don’t need to worry too much about your FastPasses – yes they will be useful and the new technology will be fun, but you won’t be fighting your way through hour long lines like at other times of the year.

Dad’s best advice to is to head to the parks for opening and tackle attractions and shows when the wait times are at a minimum, and use your FastPass+ reservations for the late afternoon when crowds peak, or in the evening if you plan to swim/nap in the afternoon (which is highly recommended with kiddos in tow!). I’d pick all of the FastPass+ times to coincide rather than be spread out, unless there’s a show you want to see at a specific time and rides you’d like to ride later on.

As for my own top picks for each park, I’m happy to share them – but keep in mind every family may have their own needs and preferences! Be careful too – the new system allows many more attractions to have FastPass than did previously, making attractions that are typically walk-ons seem like they are more in-demand than they are. You can use the My Disney Experience app to check the usual wait times before your trip and get a sense for where the long lines are – and that’s where your FastPass+ comes in handy.

In the Magic Kingdom, Dad’s top picks for FastPass+ are Space Mountain, Splash Mountain, and Big Thunder Mountain Railroad. But, since you’re traveling with kids, you might also want to consider reserving a time for Peter Pan’s flight which always has a line, and the many character greetings throughout the park.

At Epcot, the best options for FastPass+ are Mission Space, Test Track, and Soarin’. For Animal Kingdom, Kilimanjaro Safaris, Dinosaur, and Expedition Everest are the top picks – you might also consider getting a FastPass for Finding Nemo – The Musical, so that you can show up right before showtime and get a seat.

Finally, at Disney Hollywood Studios you have some choices. The three “big” rides to reserve are Toy Story Midway Mania Tower of Terror, and Rock ‘n Rollercoaster. But, if your family is into Star Wars, then getting a Fastpass for Star Tours is a good idea. You might also consider getting a FastPass for Fantasmic! seating to skip the long wait in line!

If I could just pick 3, I’d pick Toy Story Mania, Soarin’ and believe it or not, Peter Pan’s Flight (it’s almost impossible to get Peter to fit into our plan).

Oh, and by the way – I can’t confirm whether this is true, but a little mouse told me that during the test phase when you use FastPass+ with your Magic Band, you can also use the regular Key to the World Card to access the FastPass kiosks… meaning you can maximize your FastPass experiences!

Richard, Fastpass+ is going to take some getting used to for all of us, but in the end it will hopefully help us have more magical vacation experiences. Your trip is almost here – wishing you and your family a Perfect Vacation!