Hey Y’all! When Prince Charming and I visited Walt Disney World we loved riding Toy Story Mania. While waiting for the ride it is like being in a toy box from childhood. There are lots of toys I grew up. 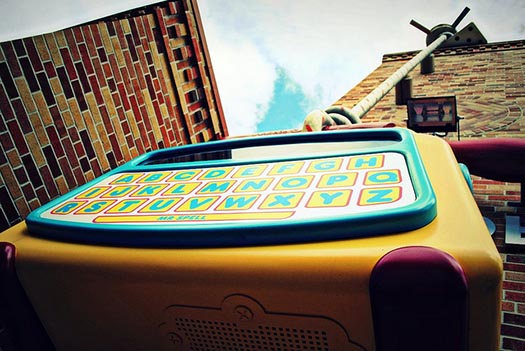 One toy that stood out to me was the Mr. Spell that is in front of the ride. Mr. Spell appeared in both Toy Story and Toy Story 2. This character was based off of the very popular Speak’n’Spell many grew up playing with in the 1970s and 1980s.

Since Toy Story Mania opened in 2008 Mr. Spell has just sat in front of the attraction not doing anything. Anyone who has ever played with one of these knows how interactive and fun they can be.

Sometime in November Mr. Spell started to come to life. Right now it is not doing much but I am sure one day it will be just like the real life Mr. Spell. How fun would it be while waiting in line to watch Mr. Spell scroll texts and speak what was on the screen?