So happy to have found you, Dad!

I have a question about going to parks when they first open. We plan to arrive as early as possible at Magic Kingdom, Hollywood Studios, and Animal Kingdom to start our days. We may go on one or two of the early magic hour days. What time is the earliest we can catch a bus to Magic Kingdom/Animal Kingdom?

Also, what is the earliest time we can get transportation to Hollywood Studios? We are leaving from the Beach Club….. We know that it will be tough to get up extra early, but plan to take breaks mid-day. Thank you so much for any advice you have! Ann Marie 🙂 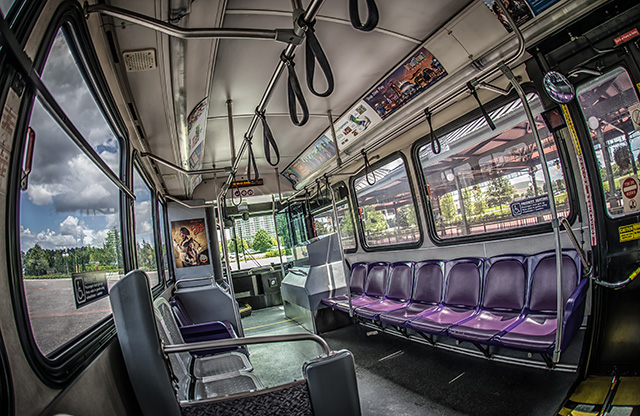 Don’t you just love these bus seats? – Photo by WDWOW

You’ll have to get up very early to beat Disney Transportation to the parks.

Normally Disney Transportation starts running 2 hours before the parks open. So if Animal Kingdom opens at 8, the buses will start running at 6. You don’t need to get up that early.

A bigger problem than when does the Transportation start is how many buses do they run? Sometimes, you can just miss a bus and have to wait 30 minutes or so before the next one arrives.

That’s why Dad is a big fan of having a, wait for it, car at Disney World

The boats to Disney’s Hollywood Studios from the Beach Club will start running about an hour or so before the park opens. It’s a nice boat ride, but it’s also not a bad walk.

But if you’re like Dad and Mrs. Mom, you don’t want to take an extra step during your WDW stay so any chance to sit down and have someone else take you to a park is welcome.

My guess is you’ll probably want to be at the bus stop 1 hour before the Magic Kingdom and Animal Kingdom open to be all set up for Rope Drop. You could probably cut it a little shorter, but 1 hour will give you a little cushion.

For EPCOT, just walk to the International Gateway. 10 minutes tops. Disney’s Hollywood Studios allow 35 minutes for the boat ride and 20 minutes to walk.

Ann Marie, you can save a bunch of time if you have a car, but Disney Transportation is really pretty good and reliable.