“Hi Dad, I’m hoping you can provide come clarification for me regarding the UK holiday deals. First off, I’m a US citizen. My son-in-law is a UK citizen living in Ireland. He would like to give a gift to our family of a vacation to Walt Disney World using the UK holiday special.

I’m nervous for him to do this because I am not a UK citizen. My son-in-law said there’s nowhere on the UK site that says you have to be a UK citizen, it just says it is only available to be booked in UK or Ireland. He’s not accompanying us on the vacation.

However, he did say that he would email me a copy of his passport and marriage license, a letter stating it was a gift to show Walt Disney World if there was any issue. Is this allowed? Any insight is greatly appreciated. Thank you, Denise.” 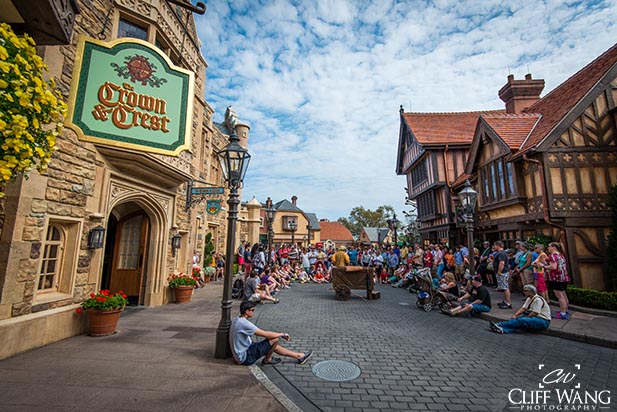 Be sure to visit the UK Pavilion – Photo by Cliff Wang

Denise, that’s a really interesting and difficult question. I started looking at this yesterday. I tried to find out the answer to the question. The answer is maybe. Sorry, yes maybe. That’s about the best thing I can come up with. I asked a Disney rep what their policy was. He said he didn’t think it would work, that you had to have somebody from the UK in your party.

Next, I looked online. Your son-in-law is right. There is nothing that says that a UK member has to be part of the party in the official Disney websites. Even in the paperwork they send out, nothing about that. I looked at online, and there are some people that have actually done it, say “Yeah, sure. I did it. Just as long as there’s a UK citizen to book it, it’s fine.”

It’s one of those that scares me a little bit. Would I do it? I don’t know. I don’t think I would do it, just because what’s the worst that could happen? Worst could happen, you get to Disney World, you’re there and they say, “Oh, I’m sorry. Where is your UK citizen? You can’t stay here. You can’t come to the parks.”

For me I would suggest you don’t do that. I wouldn’t try to us the UK Holiday package unless you are a UK Citizen. I know it sounds great, it sounds like it could be done. I would highly suggest you get in touch with our partners from Destinations to Travel to get you some help.

Dad’s bottom line is, it’s one of those things that you don’t want to get caught, because you’re at Disney World it’s possible they won’t let you in. That’s the worst that could happen. It could work out that way. Will it? I can’t tell you for sure.

Anyway, I hope that helped and just let us know what you decide.