Under the Sea – Journey of the Little Mermaid invites guests into a colorful, musical adventure with Ariel and all her friends! This ride is part of the Fantasyland Expansion and it’s just great.

Climb aboard a giant clamshell and journey under the sea where Ariel sings in her treasure trove, Sebastian serenades with a musical troupe of fish and crustaceans, Ursula plots to steal poor unfortunate souls, and Ariel and Prince Eric share their first magical moonlit kiss. 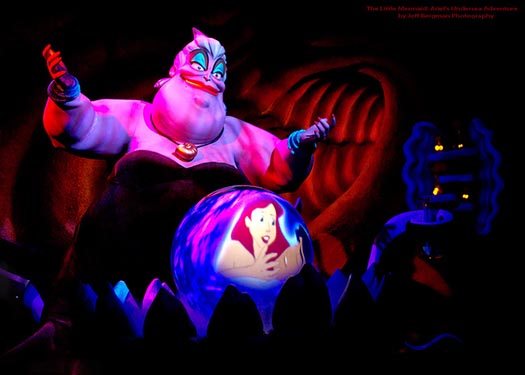 The Enchanted Forest area of the New Fantasyland is home to Ariel and her story. Under the Sea- Journey of the Little Mermaid is right behind Cinderella Castle and next to Belle’s Village. It’s located beneath Prince Eric’s Castle and next to Ariel’s Grotto. 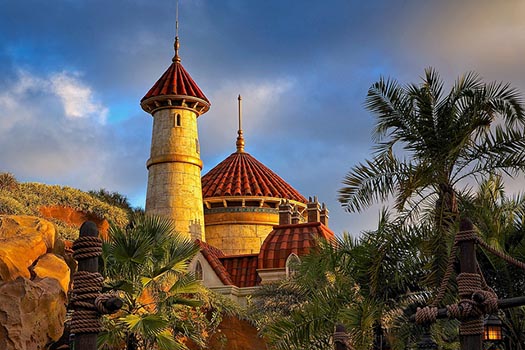 The queue area for Under the Sea – Journey of the Little Mermaid is monumentally impressive. As you approach Eric’s castle you’ll feel like you just washed up on the beach into the movie. Waterfall, gentle waves, and sandy cliffs lead up to the castle, but before you get there you’ll pass a shipwrecked boat (featuring Ariel as the figurehead).

Notice the sea grass, starfish, and tide pools along the shoreline – you’re sure to spot some of Ariel’s collection of treasures as you enter the grotto under the cliffs that lead to the boarding area. 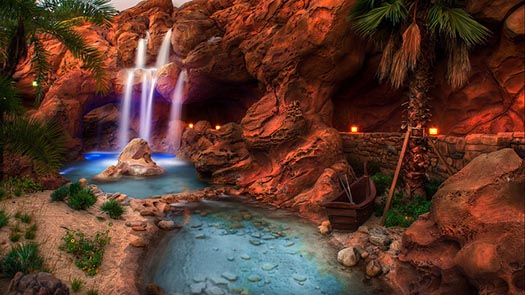 This ride is a simple, modern dark ride with incredible attention to detail. Using an Omnimover track (like in The Haunted Mansion), you’ll experience a series of rooms each portraying a different scene from the movie. With glowing dark paint, moving animatronics, and projection effects you’ll really feel like you’ve gone under the sea!

The ride starts of with Scuttle the seagull telling the tale of the Little Mermaid. Before you know it, your clamshell is surrounded by a wall of bubbles and when you look up you see Ariel swimming above you! You’ll float past Ariel’s treasure trove while she sings Part of Your World. Then party with Sebastian as he sings under the sea in an incredible display of color, characters, and sound!

Flotsam and Jetsam await in a cave to lure you into Ursula’s lair where you can see her collection of Poor Unfortunate Souls before you witness a magical transformation as Ariel becomes human, just in time for a romantic boat ride with Eric of course! Sebastian sings Kiss the Girl, Ursula is defeated, and everyone celebrates Ariel and Eric’s wedding!

Here are some interesting tidbits 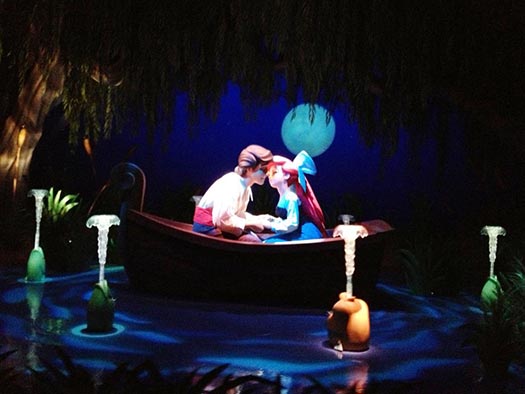 Under the Sea – Journey of the Little Mermaid is a great addition to New Fantasyland – it brings to life one of the best and most beloved Disney movies of the last 30 years!