The Voices of Liberty put on the best show in all of Walt Disney World. Maybe that’s a bit of an exaggeration, but if you are a fan of a cappella music you have to take time to hear them.

Every day, several times a day this group performs before selected showings of The American Adventure show. They sing a mix of spiritual and patriotic songs without the aid of any instruments.

Performing in the Rotunda 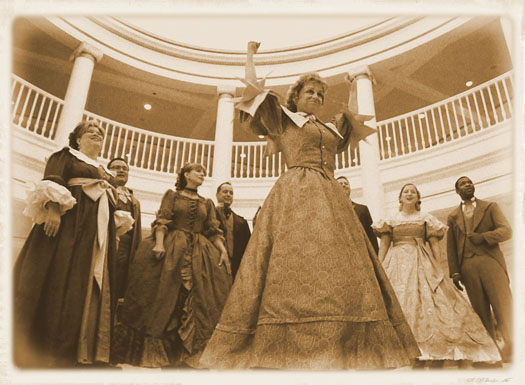 Each show is performed by a group of 8 voices. There are 4 male and 4 female voices in each group.

There are several members of the group. To cover all 7 days of the week are actually 2+ groups. One group works Sunday through Thursday and one works Tuesday through Saturday. So if your favorite singer isn’t there, come back in a few days and see if they are in the other group.

The group is made up of professional musicians. Disney auditions for members during the year.

When the show starts you’ll hear very inspiring a cappella (without instruments) harmony. Yes, just voices. Each show has 3 or 4 songs. Usually there is a very patriotic song like America the Beautiful or an historic song like This Land is Your Land.

The show changes from time to time. During the Christmas season there will usually be some Christmas music.

The audience is usually invited to join in on at least one song.

From the middle of November to the end of December, every night in the American Gardens Theater, the group (a totally different group selected specifically to sing at the Candlelight Processional) joins with an orchestra and choir members from around America and the world in presenting one of Disney World’s best shows.

The Candlelight Processional tells the story of Jesus’ birth in music and scripture. It’s very inspiring.

Holidays Around the World

While we’re talking about the holidays, during Holidays Around the World at EPCOT, the Voices of Liberty make a little change in their show and sing some great Christmas music.

I love Christmas music and listening to the group at Christmas makes Dad want to chunck everything and move to Floriday and try out. Who knows, you might see Dad signing with them one of these days.

Dad’s goal in life is to be selected to sing with the Voices of Liberty (probably have a better chance if I actually tried out). It’s been my dream since Mrs. Mom first made me go listen to them. Dad sings good, so, maybe some day you’ll see him singing under that beautiful rotunda. (Read about Dad’s Dream.)