Hey there! We’re heading to Disney in March and I had a question about the parks opening. I read everything you said about park hours but I was curious… Say a park opens at 9am. Do the gates open before 9am and the rides/etc..start running at 9am or do the gates themselves not open until 9am? Love all of your stuff and have found all of your links extremely helpful! Thanks!

Mel, I’m so glad you’ve found the site helping in planning your family’s Perfect vacation to WDW. Each park is a little different in their opening procedures, and they can even change based on crowds. So let’s look at some of the options (all based on a 9am opening time, but adjust to whatever the listed time is). 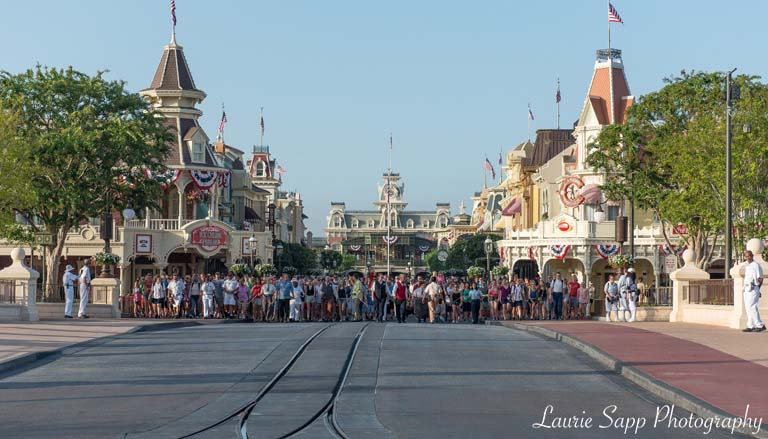 The absolute worst case scenario the you can expect with park opening is to show up and stand in line at the gates, with the gate themselves opening at 9am. At that point, guest enter in a somewhat orderly fashion and can proceed directly to their attraction of choice (walking, not running – they’ll hold you back if you run, it’s not safe or polite). That’s what’s guaranteed every day. But…

That doesn’t often happen. Usually they’ll start letting some guests into the park up to a certain point (often this does not apply during mornings with Extra Magic Hours – unless you’re at the Magic Kingdom in which case, this may apply if the crowds are heavy). Here’s how that works:

At Magic Kingdom, you may be allowed into the immediate holding area past the gates, but not through to Main Street. Just before 9am a cute opening show happens, and you can enter. Sometimes when crowds are extreme, they will let you into Main Street to shop and eat but stop you at the hub until 9am. If you are stopped at the hub, generally Cast Members will lead you to “the big rides” and you are follow along instead of passing them. Either of these options may happen 15 mins prior to 9am.

At EPCOT, guests may be admitted 15-30 mins prior to 9am and held in the plaza between Innoventions. Sometimes the cast members will lead pre-formed lines of guests to headliner attractions like Soarin’ or Test Track.

At Disney’s Hollywood Studios, guest may be allowed to enter Hollywood Boulevard up to 30 mins in advance of opening. At 9am, cast members will walk you to the most popular attractions – Toy Story Midway Mania has a special protocol where the first guests follow a Cast Member all the way to the loading area so there are no fights in the queue.

Animal Kingdom allows guests to enter up to 30 mins before 9am and holds them at Discovery Island. This is the best park to get into early since the Oasis is a beautiful attraction in an of itself which you can enjoy before lining up to head to your first ride. 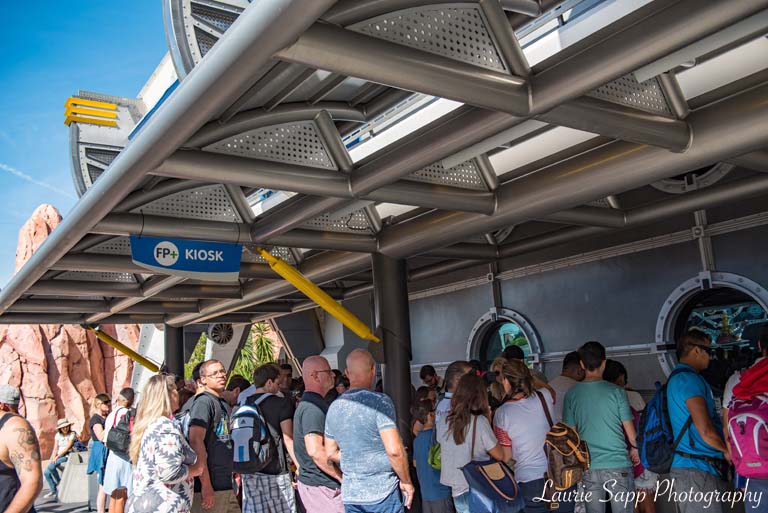 FastPass+ can help with managing your day – Photo by Laurie Sapp

Extremely popular attractions (like the Frozen meet and greet) sometimes have unique protocols and may form pre-rope-drop lines. Cast members and/or signage will indicate this to you.

Once in a while, guests may be allowed to board attractions a few minutes before 9am – but never on an Early Magic Hours morning (unless you are a resort guest, that is!).

Mel, it’s well worth it to get to the parks 30-60 minutes before the posted opening time to ensure you are at the front of the pack to the attractions and to avoid getting stuck at the crowded gates past the official opening time. You can use this time to use the washroom, apply sunscreen, or even have a coffee and a muffin – it’s all about efficiency!