Hi, I’m wondering if some of the rides at Disney have a “Stroller Swap” system, and what exactly that means? 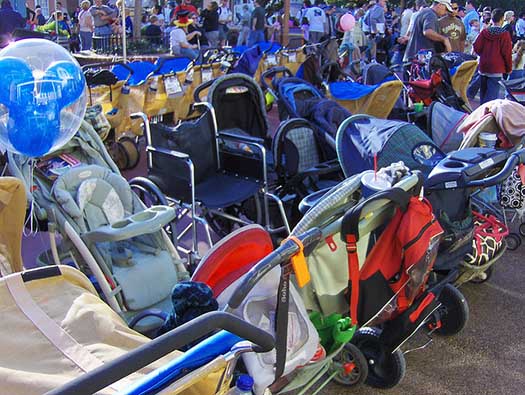 No, it doesn’t have anything to do with … Photo by Joe Shlabotnik

Dad’s Do The Swap Answer

“Stroller Swap,” “Baby Swap,” “Rider Swap…” call it whatever you like, it’s a system that allows parents with small children to ride an attraction one at a time while the other parent stays with the child, then “swapping” the child so the next parent can ride. This way parents can save time by only standing in line once! It’s a great system that can really help families experience as much of the parks as possible!

The official name for the system at Walt Disney World is Rider Swap, and it works a little differently at each attraction. Sometimes families will stay together and “swap” the child right at the loading/unloading zone. Sometimes the second parent will be routed through the FASTPASS entrance or the exit.

When you arrive at an attraction, ask the Cast Member at the attraction’s entrance for details on how you can use Rider Swap. They’ll issue you a Rider Swap pass and explain the procedure for that ride or show.

Not all attractions at Walt Disney World offer the Rider Swap service. Your park map will indicate which attractions offer the service, but here is a list of the current Rider Swap locations:

At the Magic Kingdom, you can use Rider Swap at Big Thunder Mountain Railroad, Space Mountain, Splash Mountain, Buzz Lightyear’s Space Ranger Spin, It’s A Small World, and Pirates of the Caribbean.

Another possibility for parents traveling alone would be to use the Single Rider line where available (currently only Test Track and Expedition Everest offer this option). Depending on the wait time for the ride, it may save you even more time to take advantage of the Single Rider line since you’ll be riding separately anyway.

For other tips on visiting Walt Disney World with Small Children, you might want to visit Dad’s friends over at Touringplans.com. They have suggested touring plans specifically designed for families visiting with young children which you may find helpful!

Kelly, if you have small kids, Rider Swap is the way to go to ensure you see as much as possible! Using this service along with FASTPASS will help you make the most of your trip!