Have you heard of a teenager from my area who was forced to change at Disney’s Animal Kingdom because of her Tinkerbell costume?

If you haven’t, here’s the story. The teen, whose name was April Spielman, was surprising her boyfriend from Arizona with his first visit to Walt Disney World. They spent months to make their costumes – she as Tinkerbell and he as Peter Pan. They went into Disney’s Hollywood Studios wearing them without problems.

But they were turned away from Disney’s Animal Kingdom by security guards still wearing them. Though they were given free clothes to change, as well as free FastPasses, nothing consoled that girl’s sorrow over her shattered dream.

Issues like these are not new. A woman from England named Natasha Narula wore a wedding gown and her daughter, who then was under 10 at the time of their visit, wore a bridesmaid gown to Disneyland Paris. The latter was let in but her mother wasn’t. She denied that they represented any Disney characters (her dress looked like Giselle from ENCHANTED) and they were from a secondhand store.

Well, I know that Disney has rules stating that adult Guests aren’t allowed to wear “Adult costumes or clothing that can be viewed as representative of an actual Disney character.”

In light of this story, how can an adult dress for the parks showing his or her Disney spirit without being forced to change before entering the parks? 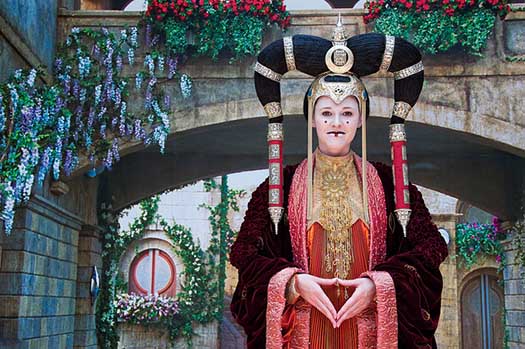 You could dress up like this Photo by wbeem

This is a tough one. I’m not on Disney’s side on this one. Disney has gone overboard at times when it comes to character protection and copyright infringement.

Yes, it is now and it always has been, Disney’s policy to not allow guests to dress like Disney Characters when entering the parks. (See the official dress code here.) Of course they don’t have any problems when guest dress in Star Wars Costumes for example. Shouldn’t they enforce George Lucas’s trademarks as much as they do their own? But that’s a different topic for a different day.

There are times, like during Mickey’s Not So Scary Halloween Party that the rules get relaxed a bit, but for the most part you have to stay away from any costume that looks like a Disney character.

So what would Dad recommend? You could dress up like a Universal character if you just have to dress like a character. (Something Harry Potterish should really set someone off. But from what I’ve seen those would be pretty warm.) You could dress up like one of the Marvel characters (Disneyish but not part of the ban). But Marvel characters are mostly hulky guys and that’s pretty hard to emulate (except for Dad who is a real hulky guy.)

Dad is not a big fan of costumes. One reason is safety. Masks cut down on visibility. Some costumes have parts that stick out and bump other people. April’s costume had wings on it that could have caused problems if they hit a child in the eye or something.

What it boils down to for me is (and remember I’m a guy) for anyone over 10 years old, outside of Halloween, costumes aren’t necessary or even all that cute. Yes, April looks a bit like the Tinkerbell in the comics (but not at all like Julia Roberts), and it’s a bit cute, but costumes can be dangerous, uncomfortable and they are totally unnecessary.