Hi. I read the other questions in regards to this and I am a little confused. In regards to the one post you replied that Love bugs are a problem in May and October. In the other post you said that October was a good time to go to Disney World. We had a trip planned for the first part of September and I am now looking for a better time to travel.

Today is the first time I have ever read anything in regards to an issue of this kind. We need to travel and be back home by Halloween so any advice you can give us we would appreciate! We are looking for low crowd levels as well as no bugs! Thanks so much!! 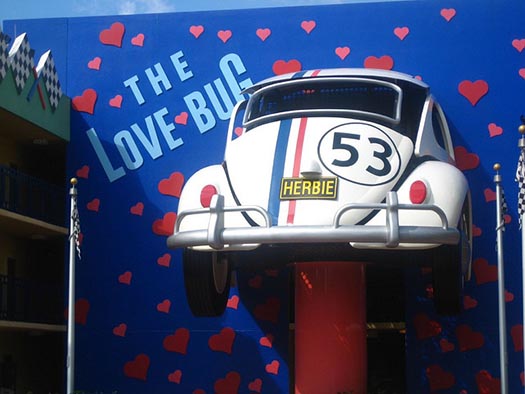 Nope, not Herbie – Photo by architekt2

Love bugs aren’t very lovable, in fact they are just plain annoying and gross. I hated the infestations we experienced while living in Texas, and I can only imagine how they could ruin a family’s magical vacation at Walt Disney World. The tricky thing about planning your vacation around love bug infestations is that the timing isn’t stable – it can happen at any point in the late spring and late summer or not at all.

When people think “love bug” and “Disney” thus usually think “Herbie!” Well I’ve got news for you – this ain’t Herbie. Love Bugs are a really annoying type of fly that stick together and crawl or fly around while they mate, and they get everywhere. They won’t bite or sting you, but they’ll annoy you and ruin the paint on your car! I’m a little surprised Disney hasn’t found a way to magically rid the property of love bugs, but I guess Mother Nature is a little stronger than Uncle Walt’s boys.

Typically, love bugs descend upon Walt Disney World in May and October (it can happen as early as September). The spring infestation is usually less severe than in the fall. But like I said, it’s tricky! Some years are worse than others and there’s no way to tell just when the infestation will hit. The love bugs only show up for a week or two but that’s just long enough to ruin a Perfect vacation.

If you’re looking for low crowd levels, September and October are a great time to visit. October is a little cooler, but the crowds are almost non-existent. As for the bugs, when the Princess honeymooned there in September she didn’t encounter the dreaded love bugs, but again they don’t show up on schedule. I’d recommend the very beginning of September or the very end of October to miss them, but I can’t guarantee when they’ll arrive.

Dad’s talked about love bugs before, a couple of times. They are gross. If you or anyone in your family is uncomfortable with bugs, you should avoid going at any of the potential infestation times. If you’re not too bothered by them, I would keep your trip planned as is and hope for the best.

Mary, there are lots of unpredictable things that can darken a holiday – even to the most magical place on earth! Orlando experiences torrential rains, hurricanes, love bugs, and extreme heat. If you REALLY want to avoid all of those AND crowds, it’s a tall order but I’d suggest a holiday in early-mid January. Whenever you decide to go, I hope you have a wonderful trip!