How often do Fastpass become available for each ride each day. For example, does Space Mountain usually offer Fastpass a couple times a day or is it just once a day? Do they usually run one in the morning, afternoon, and evening? BTW I found your site to be incredibly helpful. I found information on this site that my travel agent wasn’t even aware of. Great site!!!!! 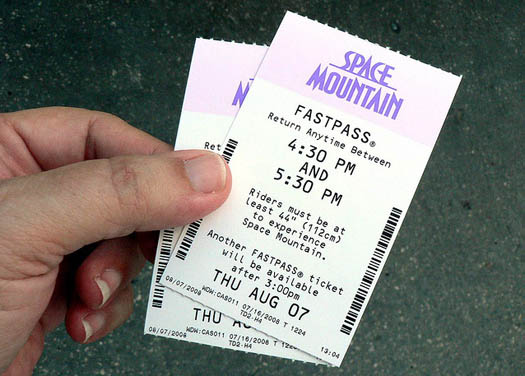 Get your FASTPASS to Space Mountain Photo by Valerie Renee

Stacey, ever since Disney introduced FASTPASS in 1999, it’s been a big hit in the parks, and a big help – to those who know how to use it. It baffles me that after all these years, and the very clear instructions provided in the park maps, that some people just don’t get how the system works, so it’s good you are doing your homework.

By understanding FASTPASS and using it to it’s full potential you can save a LOT of time standing in line on your Perfect Vacation.

Disney’s FASTPASS is a shockingly simple system. It’s a service provided on a first come, first serve basis. There is no complicated staggering of the available passes, there are simply a given number of FASTPASS tickets available for each FASTPASS-enabled attraction each day, and when they’ve all been given out, the ticket booths are shut down.

You head to a ticket machine, insert your park pass, and out pops a ticket with a return time for you to come back and ride. Sounds simple, right?

Dad, what are “FASTPASS-enabled attractions”? Well, you see, not all of the attractions at Walt Disney World have a FASTPASS option – only the most popular or slowest loading attractions use the system. Let’s take a look at where it’s available:

At the Magic Kingdom, you can find FASTPASS at Big Thunder Mountain Railroad, Buzz Lightyear’s Space Ranger Spin, Jungle Cruise, Peter Pan’s Flight, Space Mountain, Splash Mountain, and The Many Adventures of Winnie the Pooh. Some days tickets go quickly, and other times not so much. I’ve seen Splash Mountain run out of passes by noon and Big Thunder Mountain Railroad have them available at 10pm, so it all depends on crowd levels.

At EPCOT, use FASTPASS at Captain EO, Maelstrom, Mission: SPACE, Soarin’, Test Track, and Living with the Land. FASTPASS is only available when the crowds require it, so often you’ll see Living with the Land and Captain EO operating without FASTPASS due to low crowd levels. Make sure you get one for Soarin’ – unless you like 2 hours waits.

FASTPASS is available at Disney Hollywood Studios for Rock ‘n’ Roller Coaster, Star Tours: The Adventure Continues, Twilight Zone Tower of Terror, and Toy Story Mania! Whatever you do, head to Toy Story Mania! The minute you arrive in the morning if you want any chance at a FASTPASS – these are the quickest to be “sold out” anywhere in Walt Disney World, and are usually gone within 2 hours of park opening.

At Animal Kingdom, look for FASTPASSS at Dinosaur, Kali River Rapids, Kilimanjaro Safaris, Expedition Everest, and Primeval Whirl. Luckily at Animal Kingdom, there are lots of “no wait” attractions and exhibits to visit while you’re waiting to for your return time to come around.

Now, about that return time – once you’ve gotten one FASTPASS, you can’t get another until your first one’s return time has become valid, or 2 hours have passed (whichever is first). Don’t worry, Disney makes it simple by printing the time your next FASTPASS will be available at the bottom of the ticket. The exception to this is the Kim Possible World Showcase Adventure – you are required to get a FASTPASS to reserve your time for the adventure, but it doesn’t “count” towards your available FASTPASSES.

For several years, Cast Members have been very lenient about the return time, allowing guests to return at any time after their time became invalid, not just during their 30-60 minute return time window. That’s being changed, and Disney is becoming strict about return times. Other changes coming to the program may include a centralized ticket system (in testing at EPCOT) so that guests don’t have to cross the park to get FASTPASSES from each attraction.

Stacey, now that you know how FASTPASS works, use it to your full advantage! You’ll have a great time at the Most Magical Place on Earth – trust me.