We are going to be visiting from Oct 30-nov 7. I know the first Christmas show isn’t until Dec 9th, but we really wanted to do the Mickey’s Not So Scary Halloween Party so we booked it instead. The only Christmas part my daughter cares to see is the lights on Cinderella’s Castle. Do you think they will be up by our last day there on Nov 7th? Or do they turn everything on at a certain day/time? Thanks! 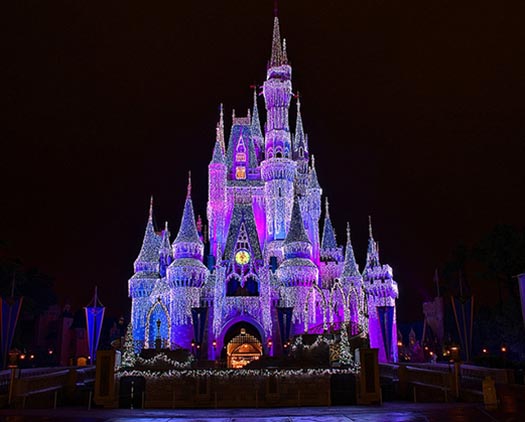 The turnover from Halloween decorations to Christmas decorations at Walt Disney World is really something incredible to witness, especially in the Magic Kingdom! In a matter of days, all of the Halloween props are removed and the park is decked with Christmas cheer! Of course, the decorations don’t go up overnight – in fact they take about a month to install – but the Castle Dream Lights are one of the first to go “on stage” so it’s very possible you’ll get to see them!

Since 2007, the folks at Disney have taken to decorating Cinderella Castle with 200,000 Castle Dream Lights each year in time for Christmas. The castle glitters and glows just like its covered in ice – pure magic. This is just one of those special touches that makes Christmastime the best time of the year to visit Walt Disney World, and why it’s Dad’s favorite time of year!

Each night from early November right through New Year’s Eve, Cinderella Castle is lit up in a special ceremony called Cinderella’s Holiday Wish, performed right in front of the Castle. Cinderella (along with Prince Charming and of course Mickey, Minne, Pluto, Goofy, and Donald) gets some help from her Fairy Godmother to light up the castle to celebrate the season – it’s a lovely moment.

Dad, this all sounds great, but WHEN does all this magic start? Well, it’s hard to say. The Castle Dream Lights will definitely be installed by the time of your trip, and they will absolutely be used for Mickey’s Very Merry Christmas Party on November 9. Usually they begin lighting the castle up a few days before the first party (in 2011 the first day was November 4) but the date hasn’t been officially announced yet.

My best guess is that you will be able to see the Castle Dream Lights during your visit, but you’ll want to watch the park times guide during your trip (last year, the November 4 first lighting was only announced on November 2) for any updates to the show schedule.

Misty, I’m not a betting man, but if I were I’d be willing to put my money on the Castle Dream Lights being lit for the first time between November 2-5, 2012. That would be a dream scenario – but I think it’s likely! Make sure you check your times guide daily so you don’t miss out! Have a very merry trip!