I’ve looked at your calendar of when to visit Disney World and I wanted to ask a question about it. Is the first week in December a really busy time at Disney World?

Balloons on Main Street get snow on them 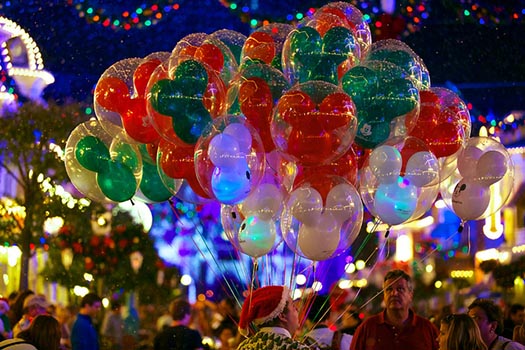 Dad’s yes and no Answer

The first week of December is a very special week at Walt Disney World. It’s special because of the special events that take place that week. There are 2 biggies, and of course Christmas at Disney World.

Before we head off into the crowds thing, I want to take just a second to talk about Christmas. The Christmas holiday season starts in early November and runs through the first week in January. It’s absolutely the best time of the year to visit Disney World. But some of the weeks have crowd problems, but they are still a great time to visit WDW.

First is the Pop Warner Cheerleader and Football Championships. While they haven’t signed a contract for 2013 yet, everyone expects that the Championships will return to Walt Disney World the first week in December. (Here’s a question I answered about last years Pop Warner Championships)

The kids that show up for the competition don’t really increase crowds that much during the days, but in the evenings, the Magic Kingdom and Disney Hollywood Studios can get a bit busier.

The other big event the first week of December is the taping of the Disney Christmas parade which happens the first weekend of December (I’m assuming it will be the 5th, 6th and possibly the 7th in 2013. Taping occurs mainly in the Magic Kingdom and the Grand Floridian. The crowds on Main Street are just incredible. In fact, you will probably be routed through the stores or even behind Main Street to get to the back of the park.

Back to the crowds … These 2 events are why I bump up the crowd ratings for the 1st week of December. The crowds aren’t necessarily bigger, but they are a bit more impactful.

In addition to the events, the main reason I bump up the rating is you won’t get a discount that week. Disney never offers any discount for the first week in December. That alone is a reason to avoid it.

If you do choose to go that week, make sure to check out my tips for avoiding Disney World Crowds. The number one tip is to go to the parks early. That’s especially true the first week of December.

Katie, the bottom line is you probably will want to avoid that week but it’s not terrible crowd wise. You can have a great time even the first week of December.