Dad’s In Your Dreams Answer

Beth, I think the list your thinking of was in your dreams – or at least not at Dad’s Guide. But don’t worry, Dad can help sort you out!

I’m certain that a number of lists for where to find characters exist. Over at WDW Magazine, I know that such a list was featured in the Characters issue in July 2014. But the problem with many of the lists out there is that characters change so often, it’s hard to keep them up to date.

That’s why Dad recommends using the My Disney Experience app on your smart phone to find characters. It’s a free app, and it’s continually updated by Disney. You can use it in the parks to track down the exact place and time that specific characters are meeting, and you can use it at home before your trip to get a sense of where certain characters typically meet.

It’s really easy. Once you download the app and login, click the Characters icon at the top. You can use the bottom navigation to pick a park, and then simply scroll to see who meets where. Or click to search for dining reservations, and then filter by Character Dining – you’ll see all the character dining meals including a list of who meets at which meals. 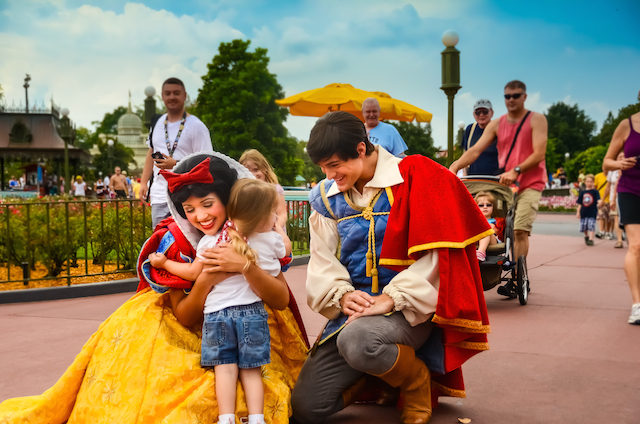 Generally speaking, here’s what you can expect:

•EPCOT has permanent spots set up for greetings with the Fab Five in Future World, and around World Showcase there are appropriate greetings in almost every pavilion (Snow White in Germany, Mulan in China, Alice in the UK, etc.).

•At Disney’s Hollywood Studios, expect to see a lot of “new” characters – Pixar and Disney Junior, and sometimes those from newer Disney films like Wreck It Ralph and Big Hero 6.

•Animal Kingdom is all about – you guessed it – animals! So in addition to favorites like Chip and Dale, you’ll find Rafiki, Baloo, and others – plus Pocahontas, Tarzan, and UP characters at the Wilderness Lodge

Beth, I’m sorry I couldn’t help you out with more info straight from Dad’s Guide, but you never know what the future might bring…