Hi Dad….we are planning a trip to Disney World in May for my daughter’s birthday. We have been many, many, times but her best friend and her little girl will be going for the first time. So exciting!! We have not been since the new Fantasyland expansion so my question is: Do you know where the Princesses meet now for autographs? Also, we REALLY need to know where we can meet Tangled!! I am just trying to get an idea so I can plan accordingly…Thanks so much!!!!! 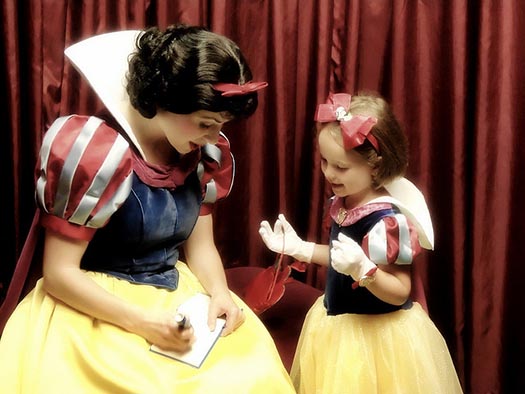 Dad’s Fit for a Princess Answer

It’s so exciting to be going on a trip to Walt Disney World with first-timers, especially when you have a little one in tow! You’ll experience the magic of Disney in a whole new way through her eyes – especially when she meets all of the princesses. While you can find princesses just about anywhere, finding the right one can be challenging, and planning your day around meet-and-greets is essential if this is a top priority.

Since you’ll be visiting in May, you’re already two steps ahead: the weather will be lovely if you have to wait in line out doors to meet the princesses, and the lines shouldn’t be TOO long. But make no mistake, there will be lines. Fortunately, Disney has added FASTPASS to a few of the princess queues to help make the wait easier, so use these whenever possible!

One of the best ideas Disney had with the new Fantasyland was to bring several of the princesses all under one roof at the Princess Fairytale Hall. It’s scheduled to open in 2013, but it probably won’t be open in time for your trip – rumors have it pinned for an opening later in the year. For now, you’ll have to travel around the World to see all of your favorite royals. Let’s take this one princess at a time…

Ariel (The Little Mermaid) has her own special meet-and-greet location at Ariel’s Grotto in the new Fantasyland, near (what else?) the Ariel’s Undersea Adventure attraction. Here you’ll meet Ariel in her fins and shells, but she can sometimes be found in her human dresses at Cinderella’s Royal Table at Magic Kingdom or Akershus Royal Banquet Hall at EPCOT. If you love Ariel, don’t miss Voyage of the Little Mermaid at Disney Hollywood Studios!

Aurora (Sleeping Beauty) can often be found at Cinderella’s Royal Table at Magic Kingdom or Akershus Royal Banquet Hall at EPCOT. She also does meet-and-greets at the France Pavilion at EPCOT, and at Town Square Theater in Magic Kingdom.

Belle has been given her own special play-and-greet area at Enchanted Tales with Belle in the new Fantasyland. This interactive storytelling experience ends with the opportunity to have your very own moment with Belle for photos and autographs. Sometimes you can dine with her at Cinderella’s Royal Table at Magic Kingdom or Akershus Royal Banquet Hall at EPCOT. Belle also appears for meet-and-greets at the France Pavilion at EPCOT.

Jasmine is usually found alongside Aladdin for a double meet-and-greet in Magic Kingdom’s Adventureland (near the Magic Carpets of Aladdin, of course) and in the Morocco Pavillion at EPCOT. Sometimes you can find her at Cinderella’s Royal Table at Magic Kingdom or Akershus Royal Banquet Hall at EPCOT.

Merida, Pixar’s very first princess, can be found (for now at least) in Fairytale Garden at the Magic Kingdom for a special play-and-greet session with coloring, archery, and a chance to meet Merida and her 3 little bear brothers. When it’s time for Disney to move on and give another character a home at the Garden, I suspect you’ll find Merida in EPCOT’s United Kingdom Pavilion.

Mulan is one of the trickiest princesses to find – you’ll have to go all the way to the China pavilion at EPCOT to meet her!

Pocahontas is also a lesser-seen princess at Walt Disney World – usually she can be found for a meet and greet at Animal Kingdom.

Rapunzel everyone’s favorite modern princess made quite a splash when she debuted at the park in a play-and-greet with Flynn Rider. This was one of the most popular character greetings ever and people are still upset it’s been removed over a year later! Luckily you still have the chance to meet Rapunzel (not Flynn though) at the Town Square Theater in Magic Kingdom. If you need even more Tangled themed magic, head on over to the new Tangled rest area between Fantasyland and Liberty Square near Peter Pan’s Flight, where you can relax in a square inspired by the movie, charge up your iPhone, use the washroom, and search for the hidden Pascals!

Snow White is found at the Magic Kingdom, both at Town Square Theater and Cinderella’s Royal Table. The original Disney princess can also be found at EPCOT’s Germany pavilion and sometimes even at Akershus Royal Banquet Hall!

Tiana is found alongside Prince Naveen at the Enchanted Glade Gazebo, between Liberty Square and Frontierland.

Similarly at Town Square Theater, the lineup of Princesses changes daily, and the various meet-and-greets throughout the parks have different times each day so the best thing to do is to check the Times Guide as soon as you arrive at the parks each day to adjust your PLAN accordingly and make sure you see all the princesses you want to!

Carmen, with a little smart PLANNING and a little pixie dust, I’m sure you’ll have a trip full of meet-and-greets fit for the little princess in your party.