Hi there! My sons are very into the Disney villains. I saw something recently that they had a Villain day on a Friday the 13th this year. Is there any other time of year they do things like that? Or any suggestions/attractions for kids who love the Villains? 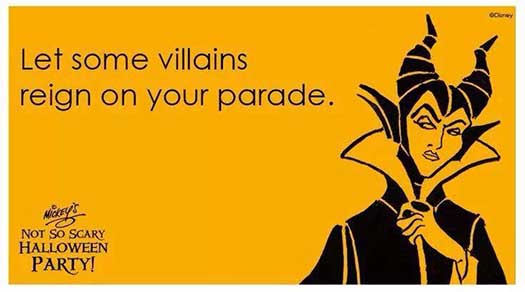 Ever have this happen? – Photo by WDW Shutterbug

The Disney villains are great characters that lots of people love, but they are really underrepresented in the parks. Recently, there has been an increase in popular demand for villains and some special events and merchandise have been released focusing on them. It’s hard to tell if villains are on the rise at Walt Disney World or if they’re being tried on for size, but let’s take a look at where they can be found.

The Friday the 13th Unleash the Villains event you’re referring to happened this past September as a part of the 2013 Limited Time Magic campaign. There’s nothing to indicate that this special one-time event will be repeated, but it was incredibly popular, with reports of sold-out merchandise and special treats, long lines to meet villains and see shows, and major traffic jams to get anywhere near Disney Hollywood Studios. There’s hope that the event’s popularity will lead to more like it in the future. 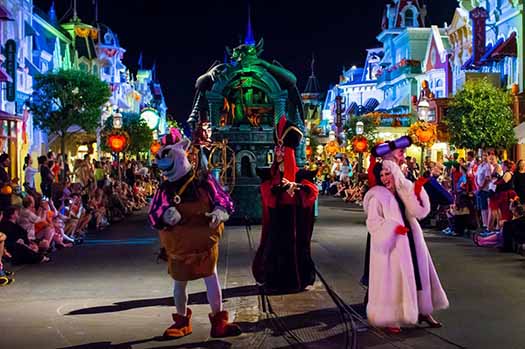 Halloween at the Magic Kingdom is also a great time to encounter villains, but you’ll have to head to Mickey’s Not So Scary Halloween Party to see them. This year, villains played a part in the Boo to You parade, Happy Hallowishes fireworks show, and even a special villains stage show and meet and greet.

There’s always a limited amount of villains merchandise in the stores around Walt Disney World, but there seems to be more around at Halloween. From “poison” candy apples to villain-inspired Mickey ears, you’ll find more options for souvenirs that represent your favorite movie bad guys (and gals).

If your idea of Disney villains extends to the Star Wars universe, you can encounter Darth Vader year round at the Jedi Training Academy at Disney Hollywood Studios. Or you can attend the annual Star Wars Weekends event which showcases the entire roster of heros and villains from Tatooine to Naboo. 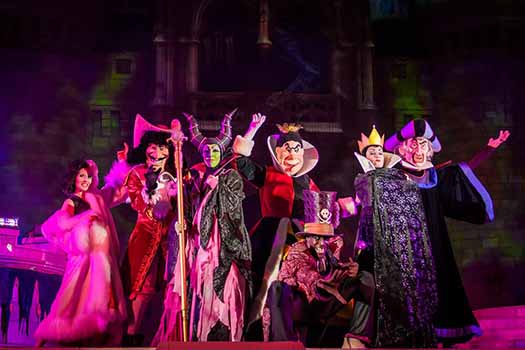 Attractions and shows are another area seriously devoid of villains, and when they are represented it’s usually only in small doses. A few of the best places to get your villains fix are Fantasmic!, Agent P’s World Showcase Adventure, Sorcerers of the Magic Kingdom, and Under the Sea – Journey of the Little Mermaid.

Jennifer, it’s too bad that Disney hasn’t paid homage to their popular band of villains in the parks outside of a few key instances. Keep your eye out and watch Dad’s Guide – I’ll keep you in the know if any new villains events or attractions are announced!