“We leave for our very first family trip to walt Disney world 9/26-10/5. We made be our guest before park opening reservations for 10/3 and 10/4 (trying to decide which one to keep) because our goal is to get a pre park pic in front of castle and to get on 7 dwarfs before park opening.

I’m really bummed because that’s the main reason we wanted to eat in the park before park opening and now I’m afraid that the new opening procedures have spoiled that chance.

Do you think we’d still have a chance if we get there at 7:45 for our 8:20am reservations? Do you think they’d allow us in at that time since we have reservations? Since they aren’t supposed to be allowing general guests into the park holding area until 8?

There isn’t an early magic morning or anything that day, so do you think we still have a chance? Also, which day do you think we would have the best chance at this picture? 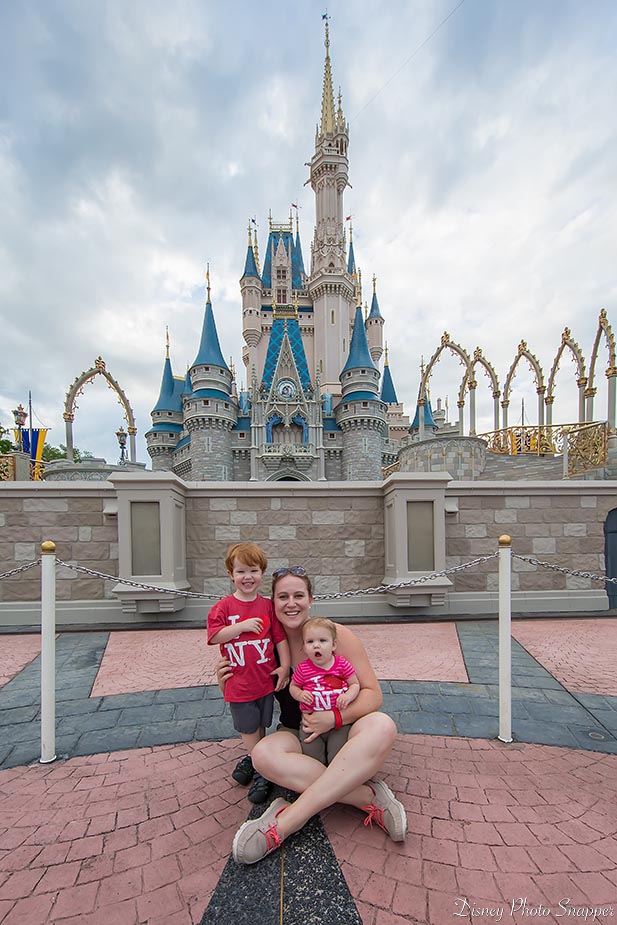 I think you might be overthinking this just a little bit.

If your reservation at Be Our Guest is for 8:20, you’ll be able to get into the park around 8 or maybe as early as 7:50. Just walk down Main Street and get your picture. That early you won’t find many people congregating in front of Cinderella Castle.

It won’t keep you from taking a picture. Not that many people get there that early and if you get in before 8, you’ll have the park to yourself pretty much.

Oh and Disney does rope (or chain) off the area right in front of the castle so you’ll be able to get a picture just like the one above.

As to riding Seven Dwarfs Mine Train before the park opens, that’s not going to happen. Your Be Our Guest meal will last until after 9 and you won’t be able to ride before you go to Be Our Guest. Plus the ride won’t open until 9 AM.

As to which day will be more crowded, the Mickey’s Not So Scary Halloween Party day will have lower crowds, but much shorter hours. You’ll have to leave the park at 6pm.

On the Extra Magic Hours day, the crowds will be bigger, but, if you’re staying in a Disney hotel you can stay in the park until 11 pm even if you’re not you can stay until 9. The crowds on MNSSHP days are usually pretty small so I’d pick that day.

Kay, the bottom line is either day should work for your picture in front of Cinderella Castle. It’s really a take your pick. I’d lean toward the Mickey’s Not So Scary Halloween Party day because crowds will be much lower that day.

PS. Parts of this answer were taken from an email I sent to Kay the day the question came in.