“Is the Express Transportation option really worth it for saving time while park hopping?” 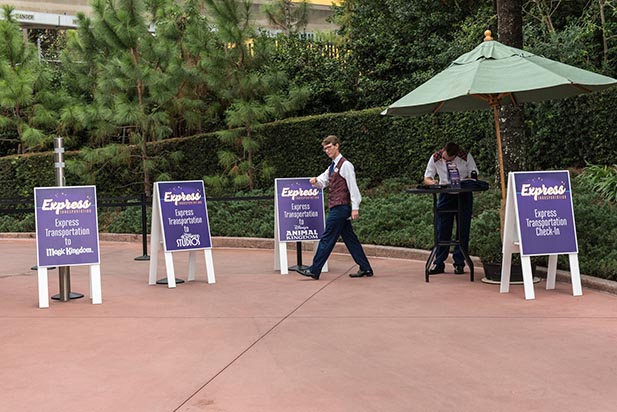 The Checkin point at EPCOT – Photo by Laurie Sapp

This is a great question, and it’s something really new.

About three months ago, Disney started this new Express Transportation option where you can go between the parks.

You just go from park directly into park. That’s a lot of time savings. That’s a big time-saver, not having to go through security and the ticket booths. Without Express Transportation if you wanted to take a bus, say from the Magic Kingdom to Disney Hollywood Studios, you have to take a bus.

You never know when the buses are coming. There’s no schedule. Wait for the bus, get on the bus, go over to Disney Hollywood Studios, go to the ticket gate, go through security. All of that. It’s just, it’s a time factor.

With Express Transportation, they pick you up at the park, they take you to the other park. You go right in, right in. You’re right in the park. The entry places at the different parks, at Magic Kingdom, it’s over by Buzz Lightyear, so you don’t have to go all the way out, all the way down Main Street, out the front. It’s just right there by Buzz Lightyear.

They’ve got an area in each park where you get on the bus, you go. At EPCOT, it’s just on the east side of Spaceship Earth, kind of over by where you get the the wheelchairs.

Express Transportation is not free. It’s $19 a day, $29 for seven days, and it’s only for people with Park Hopper passes. If you don’t have a Park Hopper, you wouldn’t want to do it anyway. If you’ve got a Park Hopper, it is a convenient way to get from park to park without having to go through all of the hassle of going to the bus, getting on the bus, going through security, going to the ticket gate again.