I am going to Disney in November 2015. I am currently 5’5” and 340lbs. I haven’t ridden rides in a long time because I have been too scared to fit. I have looked at a lot of your information on here and I have made lists of all the ones I think might be alright to try. My nephews really want to ride the Dinosaur ride in Animal Kingdom but I saw that it had a lap belt. How big are the lap belts? Airplanes I usually have to have a seat belt extender because they wont fit. Are they similar?

Melanie, I understand all too well the concerns of being “Pooh-sized” at theme parks. Luckily for us, Walt Disney World is one of the most accommodating theme parks around – and while others in Orlando sometimes don’t build rides for folks who aren’t “Harry-Potter-sized”, WDW does a pretty great job of being inclusive.

The thing about Disney rides is that they’re usually built for family experiences, so sometimes folks on the bigger size simply take a little extra space. Instead of squeezing in 2 per row on Aladdin’s Magic Carpets or Big Thunder Mountain, you’ll take your own row. On “group” adventures like Kilimanjaro Safaris, you’ll share a bench with others – but no more than will comfortably fit. 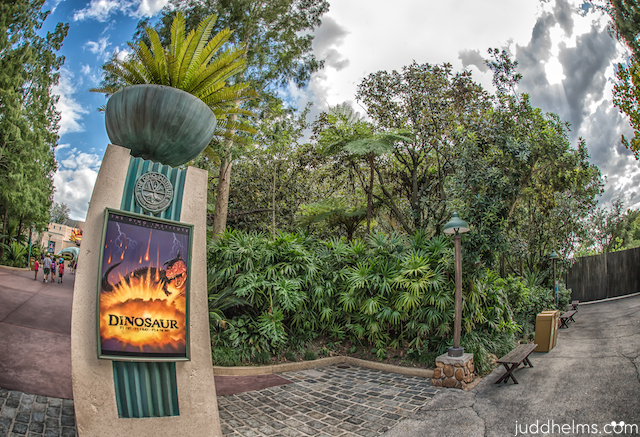 A couple years ago I gave some assistance to a gentleman with a similar problem, and lots of fans chimed in. And over at AllEars.net
a bunch of folk have shared their Pooh-sized experiences. It seems that the general consensus is that WDW is pretty safe for folks of all shapes and sizes.

Disney does offer seatbelt extenders where safe to do so (you’ll need to ask for them though). And yes, lap belts at Disney are similar to airplanes or cars. I haven’t seen them myself on Dinosaur, but if they are available and you need one it will be provided. In general, I don’t see too many seat belt extenders – maybe Disney builds their seatbelts extra long!

Now, I can’t guarantee that you’ll fit in Dinosaur, but I don’t think it will be a problem. In Dinosaur, everyone has their own seat, in 3 rows of 4 seats per car. Try to sit on the end for a little more room. It may be a bit uncomfortable, but I’d be surprised if you didn’t fit.

And don’t stop at Dinosaur! Just about everything at WDW should be within your reach (the Barnstormer may be pushing it, as even smaller adults can feel squishy onboard).

Melanie, you’re going to have an amazing time! Don’t let fear stop you from trying to experience everything. Have a magical time!