Our next question comes from Pete in New York. Pete says, We want your opinion. We are headed to the all star resorts on November 29th through December fourth. Pop Warner starts December 3rd.

Will we be okay going the days before? Was worried that they may start arriving several days before December third. 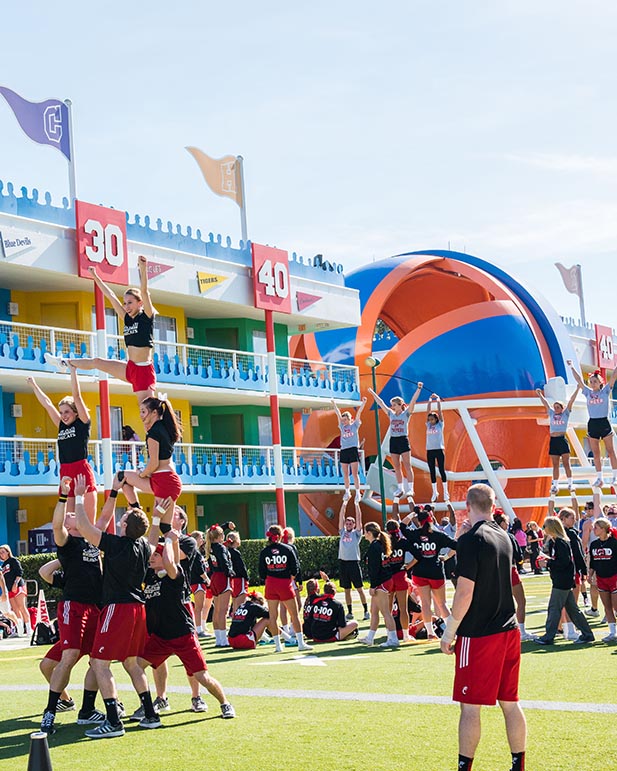 They do practice a lot – Photo by Laurie Sapp

Pete that’s a really good question. Every year the Pop Warner Football and Cheerleader Championships are at Walt Disney World.

You will see around the third and fourth, the all stars will be packed with kids. Probably starting around the second. They will be packed. Now, the parks is another story. The first couple days of the Pop Warner championships are days where there’s events, there’s games, there’s competitions and the kids are pretty busy the first few days. They don’t get into the parks.

Typically what happens, as teams start losing those are the days they end up in the parks. Later, after the fourth, by the way I know, it’s already December second. I just got this today. Sorry. I just opened this up, I said, what am I going to do?

It’s too late. You’re there. You probably already know but typically what happens is the first few days, yes the kids will be in the resort. Yes they’ll be practicing in the resorts. The girls will be screaming and going crazy in the resorts but not so much in the parks.

As the week wears on they end up in the parks. They don’t typically check in really early. They’re usually on a budget. Tight budget. They’re there, they come in the second, the festivities start the third, fourth, fifth, sixth and then when they start getting out of the festivities that’s when they go to the parks.

I hope that’s good. Guys, the bottom line is it shouldn’t be a problem. It’s typically not a problem and let us know. Tell me. This is going to be late, sorry, but let us know how it was.