“We are a group of 9. We are staying at Saratoga Springs during the last week of Jan into Feb. We are a mix of older(Early Sixties) to younger(4-8). A few of us have been to WDW a few times most have not.

We have ADRs at the Hoop Dee Do Revue, ‘Ohana, and in Disney Springs for Dinner. I am concerned for time because we only 1 day per park except for two day at the MK and one floater day at the end of our trip. I have heard that Saratoga Springs is spread out and that the Bus service is spotty at times. One the folks traveling with us lives in Florida and will have her 7 passenger SUV, so we only need a smaller car.” 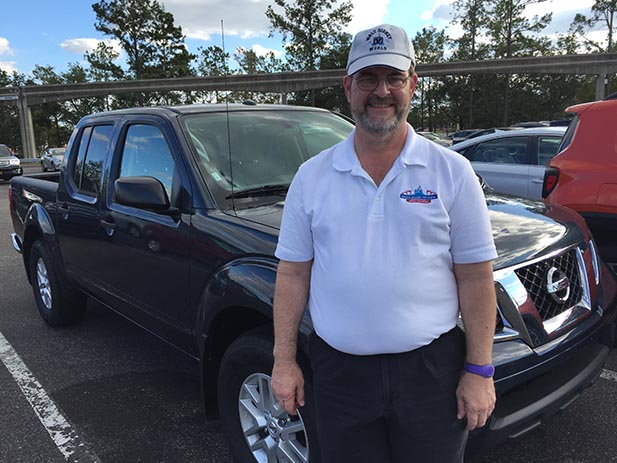 Dad and his sweet ride last week at EPCOT – Photo by Mrs. Mom

Jim, I am a big fan of having a car at Walt Disney World. I was there last week, we had a car. I usually have a car.

Now, I’m not opposed to riding the buses. I’m not opposed to Disney transportation. I just prefer to have a car. That’s who I am. I live in Oklahoma, Texas. I’ve lived in Oklahoma, Texas all my life, at least most of my life. Since I started driving, I drive everywhere. I used to commute 105 miles each way. So I’m big on driving myself around. I like having that control.

In fact, while we were at the Port Orleans French quarter this week, we tried the buses a couple of times and we ended up both times going back and getting in the truck. We rented a truck.

Yes, the buses take you right to the front gate. Yes, you have to park and take that entrance step. But, even at that, if you’re not waiting for a bus you’re saving time. And during the middle of the day especially I think you’ll find that driving is faster.