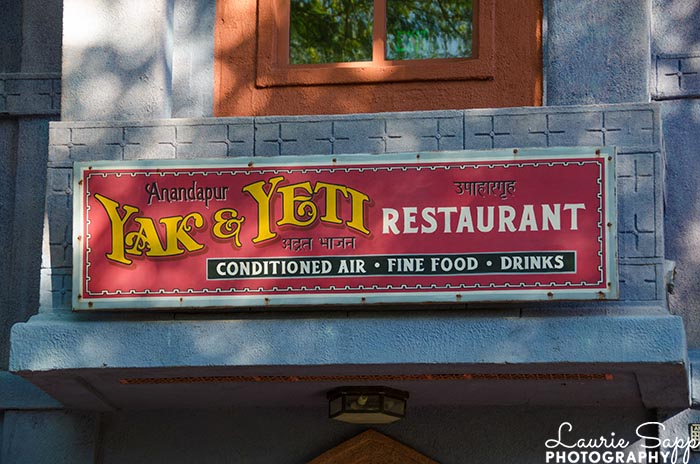 Ok, so time to try out Yak and Yeti – Photo by Laurie Sapp

We were looking for a last minute (about 45 days before arrival) place to have dinner for a few of our team. All of my favorites were booked up. One of the team found a reservation at Yak and Yeti that would work so we booked it. Let’s just say I was a little skittish at the thought. I’m not an adventurous eater. But I do like Chinese food so maybe it would be OK.

Wonder what Dad can Eat?

I had been looking at the menu and was pleasantly surprised. There were several things that looked pretty good. In fact, I wanted to try a bunch of things, like, let’s see, Lo Mien, I like Lo Mien, and Shrimp Lo Mien sounded great. Egg Rolls, gotta have Egg Rolls. Pot Stickers, I need to try Pot Stickers. Dim Sum Basket, interesting… OK, hungry hippo, that’s 3 appetizers and an entree. A little much don’t you think?

OK, so I wasn’t going to get to order it all, but I thought I could find something safe to eat.

Inside Yak and Yeti 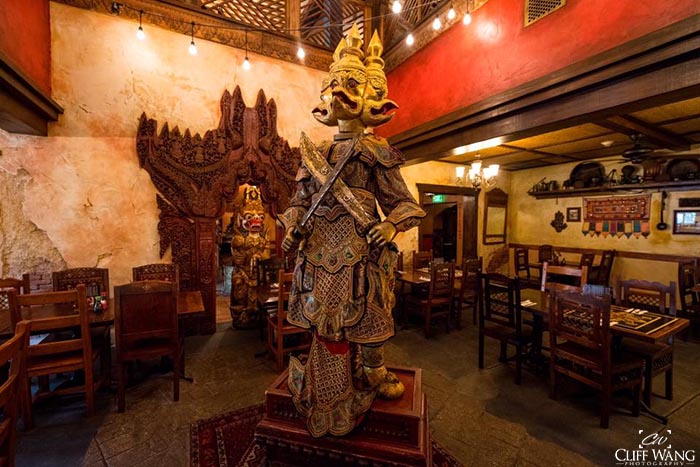 Finally the day came and we arrived at Yak and Yeti. This was a small team meeting with my primary assistants, Stephanie who brought her husband and Tatjana who brought a friend who was traveling with her. So the 5 of us gathered, and waited for time to eat.

In just a few minutes we were seated. Yak and Yeti is a very interesting place. I’ll call it causally ornate. The restaurant felt very casual, relaxed, but the fixtures, chairs, decorations all were very ornate. A nice blend. I liked it.

I’ll Have One of Everything 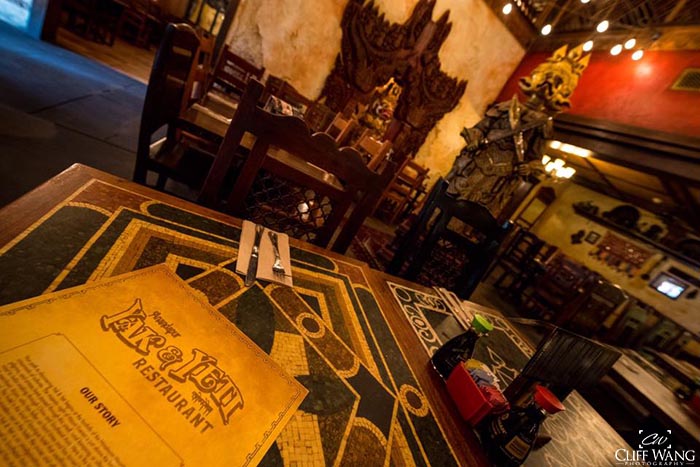 The Menu – Photo by Cliff Wang

In a few minutes the nice waitress showed up with menus. There was an extra menu with some seasonal specialties on it. Interesting. She took our drink orders and off she went.

I let everyone look at the menus for a few minutes. There were a lot of oh that sounds good. I think I’d like to try that. It made me think. Why not. I asked if everyone was OK with ordering a bunch of stuff and sharing. They all loved the idea. I told them I would order a bunch and if they wanted something else just add it on and we’d have a feast fit for a king.

That’s what we did. 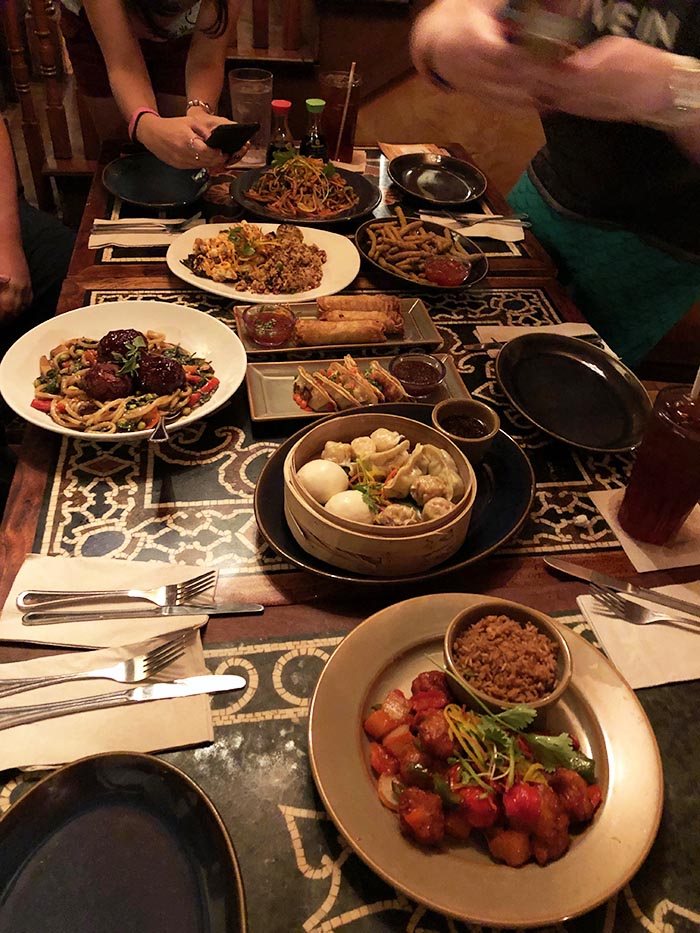 It all looked so good – Photo by Dad

We ended up with 7 different dishes to pass around. My Lo Mien, Dim Sum, Egg Rolls, and Pot Stickers, along with the Korean Roasted Cauliflower, Wok-Fried Green Beans, and Korean Meatballs from the seasonal menu. We told the server to bring us bunch of plates and put all the food in the middle of the table we were going to dine Family Style!

It was a lot of food.

It was good food.

It was really, really good food.

We all filled our plates and ate and ate and ate. Actually it was just the right amount of food. There really wasn’t anything left over and everyone was pretty full, except we all left a little room for dessert.

I really like the Lo Mien. The shrimpies were great and abundant. I will say the Egg Rolls were nothing to write home about and the side of fried rice just wasn’t very good. But everything else was really good. We ate it all. 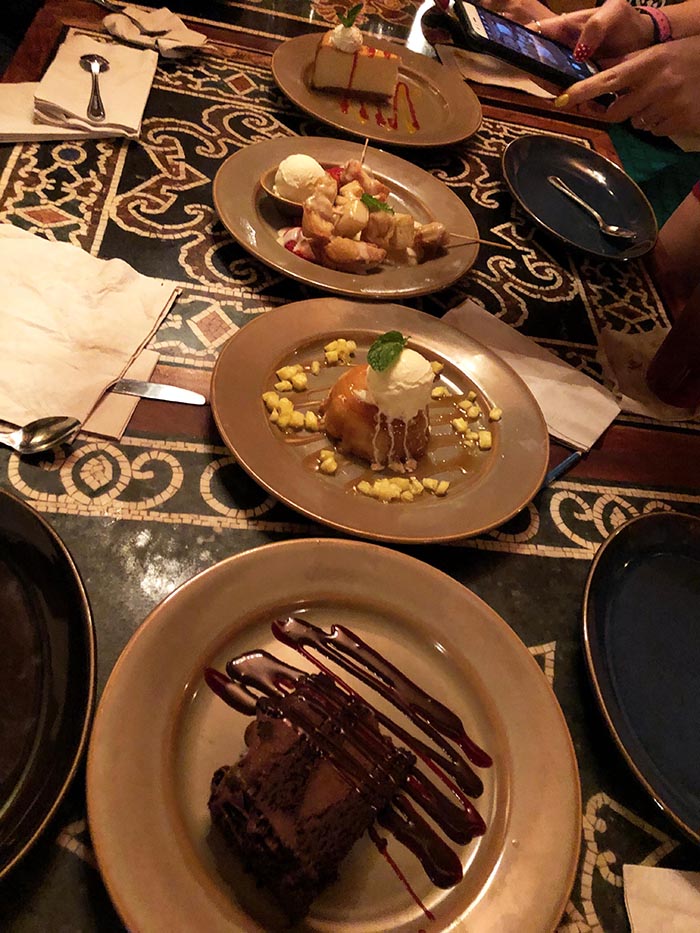 Time for dessert – Photo by Dad

The Family Style worked so well on the entrees, why not do it with dessert? So we did. For dessert we had the Fried Wontons, New York Style Cheesecake, Pineapple Upside-Down Cake and of course, Chocolate Pudding Cake. Again, we passed it all around. Everyone had a little. It was just the right amount. Four desserts for 5 people. Yummy.

I really liked Yak and Yeti. It wasn’t bad at all. The food was good. The Korean stuff was too spicy for me, but the adventurous eaters like it more than anything else. Adventurous eater or not, if you like Chinese food you’ll find something or a lot of somethings at Yak and Yeti you’ll like. I give it 4 stars on Dad’s Disney Dining Dish. Not bad at all. I’ll go back.